Humpback whales were not even on the agenda. Yet there they were, a trio of barnacle-clad black shapes shifting through the sea…

Captain Beto slows the boat to a stop, but the whales continue edging closer, now a mere fifty, and thirty—suddenly twenty feet from our little blue panga. He cuts the engine as we gawk at the strange side-feeders sliding through the water, their bristles of baleen in full view, the signature fluting of the humpback’s “chin” glistening beside the open jaws.

“Do you see that! Do you see the baleen?!” I shout to the kids, though not one of the three is sitting more than five feet away from me. It’s a textbook illustration brought to life and at closer range than I’d ever imagined I might see.

Understandably, the squeals from our small crew do not stop. A fin rises up just a few feet from my son as if in salutation.

“This one is a juvenile,” our bilingual guide points as the fin splashes back into the water.

“I thought whale-watching season was over!” I gasp, half laughing.

Edgar grins and shakes his head, “I don’t think anybody told them.”

The whales stop feeding for the moment and sink down into the sea. What they will do next, where they might appear again—if at all—is anyone’s guess.

We sit in silence looking nervously in every direction.

“Over here!” shrieks my mother-in-law.

A mass of mammal glides past us portside, the juvenile next to her. The wooden boat leans as we all look over its side at the enormous back passing slowly beside us, a mottled map of barnacles and scars revealing its journeys of tens of thousands of miles. At last, the tail fin follows, tracing along the surface of the sea. It’s at least as wide as the boat.

Will they bump into us? What would happen if they did? Are we all still wearing life jackets?

“Zip up your front!” I wave a nervous hand at my daughter’s open life jacket, catching sight of my wet suit sleeve.

Was it really just this morning that we were in the water swimming beside a whale shark that was two stories long—but now seems suddenly small? Has it only been–what? Three hours since I first tried on this wet suit in La Paz, which I’ll also wear snorkeling with sea lions this afternoon? It’s already two bucket list experiences of a lifetime packed into a single day–not counting our picnic lunch on Isla Espirtu Santo, a UNESCO Biosphere Reserve.

But now these whales, too? These enormous, incredible, bigger-than-a-bus-sized humpbacks suddenly beside us? They were never even in the plans.

“Look!” my husband’s arm flies starboard as I lunge forward with my camera. The third whale surfaces on our other side.

I leap up to the bow where my son kneels, his grip still fixed on the coarse rope as it has been since Captain Beto first spotted the whales and we agreed to alter our course. I scramble to adjust the focus, but pause. What am I seeing through the lens?

I lower the camera.

On the island of mammal beside us, a small hole opens up. A great groan erupts from the sea as if the boom of Triton’s will. It reverberates through my every bone as I suddenly question everything.

The sound is eerily familiar yet foreign. I realize it’s the sound I’ve heard whales make on the kids’ favorite wildlife TV shows, but a sound that—until this moment—I thought could only be heard under water using special equipment.

It stretches on, a sonic yawn, removing any doubt that this is indeed the voice of a whale. If someone screamed in surprise, it could not be heard for the thunder.

And then, in sudden silence, a wave of laughter washes over us.

“THAT WAS AMAZING!!!” my daughter shouts, still pressing the brim of her sun hat protectively against her ears.

I feel the heat of tears washing down my face as I gasp and laugh and look around at our three generations of enormous grins bubbling over with laughter. I raise the camera again, trying frantically to figure out how one captures such a moment in a photograph, with whale parts here and whale parts there as the humpbacks roll at play. Between us and the barren hills of Baja, there’s not another boat in sight.

Soon, a motion much closer captures my attention and I peer down in the water beside me. Startled, I realize it’s the side of a face passing by. The line of a massive mouth curves in a downward smile and at its endpoint—an eye.

Another barnacle-edged fin rises up from the water and, I quickly gauge, it must be taller than the children.

I turn to see a waterfall in reverse, a great geyser rushing up from the other side of the boat to a cloudless sky. I click in rapid succession uncertain of what the camera may see, until at once we are drenched in its downpour.

For a moment, we’re surrounded by a mist of sea-salt spray, and between us and the whale there shines a rainbow.

I raise the camera, suddenly realizing it’s as wet as the rest of me. I look at the lens in a panic. Salt water? The stench of fish breath hangs in the air.

“Kids, you can now say you’ve been sneezed on by a whale!” my husband exclaims.

All I can think to do is protectively lick the glass clean.

“And now…we’re covered in whale snot!” he cackles.

I spit starboard and take aim. 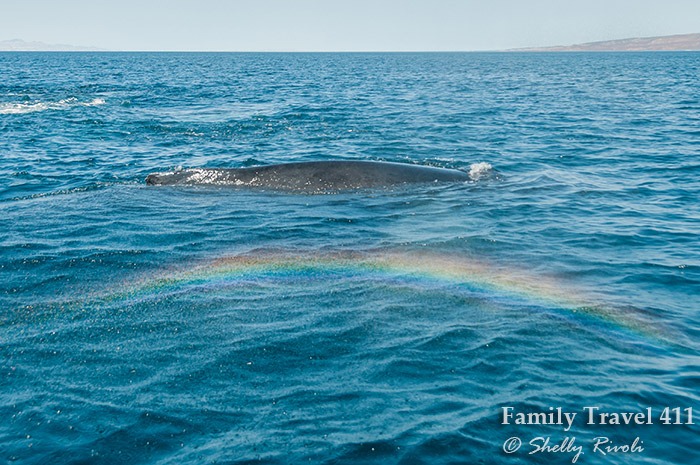 The kids squeal, “Whale snot!” and suddenly the rainbow is gone.

The whales continue to appear and disappear as Edgar fills us in on the lifestyle details of humpbacks passing through the Sea of Cortez, all the while getting completely upstaged by the subject of his discourse. It seems the whales are every bit as curious as we are.

They stay with us, passing about the boat for a good several minutes more leading me to wonder whether we are in fact the observers or the observed? Whale watchers or the whale-watched?

After we finally bid our farewells to the whales, I wonder how the adventurous mother whale might later describe the encounter to the rest of her pod.

“Humans were not even on the agenda, yet there they were in their little boat on the sea—and so close to us.”

Our adventure was booked through Mar y Aventuras on our own dime. Contact them to schedule your family’s own adventure on the Sea of Cortez.