HUNTSVILLE, ALABAMA: The U.S. Space and Rocket Center – In my kitchen, above the breakfast table, you’ll see a photo of Albert Einstein playing the violin with one of his most famous quotes printed below:

“Imagination is more important than knowledge. For knowledge is limited, whereas imagination embraces the entire world, stimulating progress, giving birth to evolution. It is, scientifically speaking, a real factor in scientific research.”

It’s been posted there for years as an important reminder, and a beacon, as I navigate life as both a creative professional and a parent. Yet never did Einstein’s quote resonate so loudly with me–as if vibrating through the piano wires ingeniously woven to create the springy tires on the lunar rover parked before me–as it did during my visit to the U.S. Space and Rocket Center in Huntsville, Alabama. 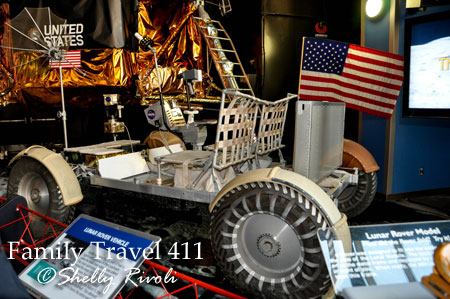 If you ever needed proof that science, imagination, math, and creativity have a home in this world together, you will find it housed in the Saturn V Hall of the Huntsville Space Center, where you can stroll beneath all 363 feet of the rocket prototype that  ultimately solved the riddle of putting men on the moon.

Just one of the rocket booster segments comprising the Saturn V on display at the U.S. Space and Rocket Center.

Viewing the three enormous “moon boosters” above, the instrument panel with its 22 ft. diameter, and the proportionately minuscule capsule created for earthly passengers, one can’t help but marvel that anyone ever imagined a moon walk by man was possible, let alone, made it so. 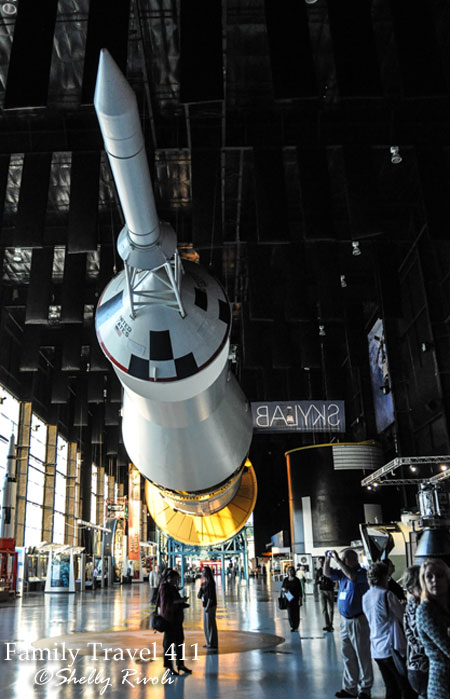 The Saturn V, designated as a National Historic Landmark, may dominate the hall, but the supporting exhibits are nothing short of inspiring.

Here, you can get up close to a life-size replica lunar rover and marvel, as I did, at the piano wire wheels and other details that made joyriding on the moon possible. Climb into a Mercury capsule and contemplate how you would feel traveling solo in this early spacecraft, and take a look at the original Mercury and Gemini trainer capsules used by the astronauts. 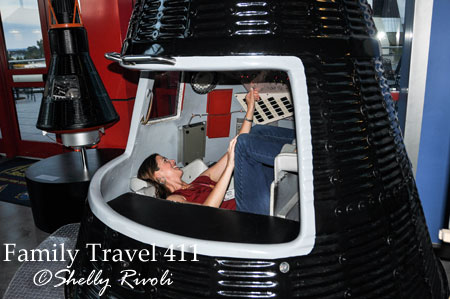 Yours truly, testing out the replica Mercury capsule (not for the claustrophobic).

You can also step into a Skylab solar array, the first space station launched into Earth’s orbit using a modified Saturn V rocket, and peek into the mobile quarantine unit where early astronauts bided their time in the final phases of re-entry (playing Scrabble in an Airstream trailer).

But before you go, make sure you take a moment to behold the real Apollo 16 capsule, “Casper.” This beauty was used on NASA’s fifth moon-walking mission to collect photos and samples from the Descartes region of the moon. To its side, you’ll see an authentic moon rock on display, brought back from the visit–proof positive that with enough imagination and hard work, nothing’s out of reach.

How to get more from your visit to the Huntsville Space Center: 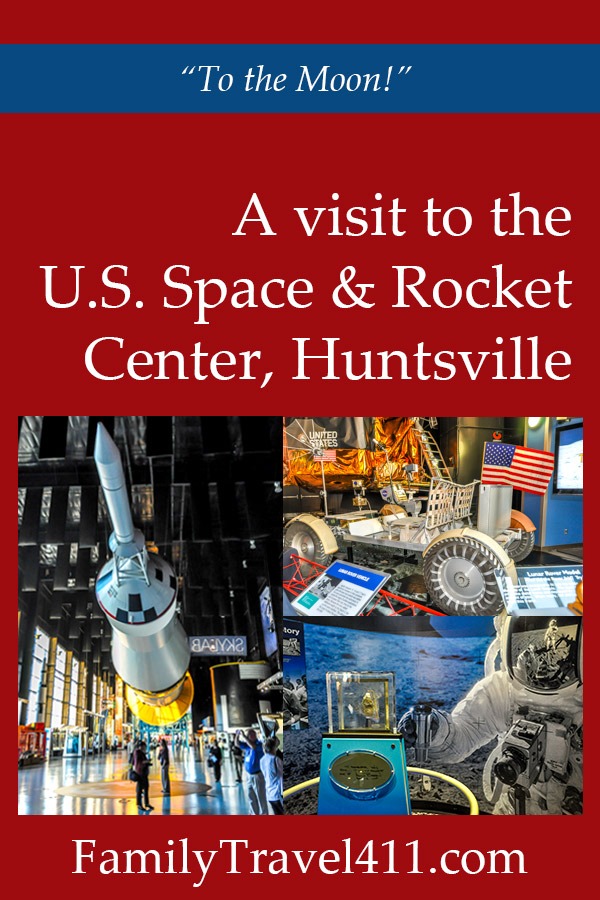 Daily bus tours bring visitors to the Redstone Arsenal for a closer look at the Space Station Development Laboratory and the Redstone Test Site, while giving an overview of the Marshall Space Flight Center’s important role in the history–and future of space exploration (additional fee; must be a U.S. citizen). Click here for current rates and departure times.

Go for a ride:

If you’re feeling up to the challenge, try out one of the museum simulators, such as the Space Shot, where you’ll experience what a rocket launch really feels like (must be a min. 54” to ride), or the G-Force Accelerator, where you can train like an astronaut and push against centripetal force in a test of your space strength (must be a min. 48” to ride).

Children’s workshops on space themes and “astronaut issues” are held the second Saturday of each month, and are geared toward kids ages 6 to 9 years. Additional workshops for pre-K students are held from 9 a.m. to 3 p.m. on Saturdays and Sundays. Workshops are included in the price of admission. Click here for more information.

Take in a show:

If you have time, there are three theaters offering daily shows, including a full-dome IMAX theater.

The U.S. Space & Rocket Center at Huntsville is also home to the world-famous Space Camp, where kids from 9 to 18 years can learn the mission-critical skills required for a successful space launch and put them to the test. There are now programs for adults, day camp opportunities, and a Family Camp offered as well (for more information about their camp programs, visit www.spacecamp.com).

Plan your visit to the Huntsville Space and Rocket Center:

Hours and admission: The U.S. Space & Rocket Center at Huntsville is open 7 days a week from 9 a.m. to 5 p.m., excluding major holidays. Children under 4 years are free and those 5 to 15 years receive a discount. Click here for details and to buy tickets online.

Get a free set of wheels: Complimentary strollers and non-electric wheelchairs are available with valid ID.

Falling for Howard: A Love Story (of Sorts) – The Howard Weeden Home