Follow along on our family’s adventure on a 2-story safari jeep tour of Safari West Wildlife Preserve in Santa Rosa, California. Photos and tips for your own family’s visit follow. And don’t miss our review of our overnight stay at the preserve in an African tent! 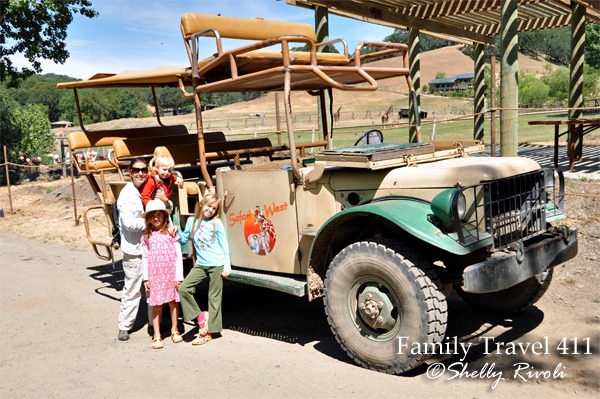 One of the double-decker jeeps used for Safari West Wildlife Preserve tours.

The first question any child of three years or seventy-five will likely ask is, “Who gets to ride on the top?”

Indeed, everyone in our group of ten safari goers would have liked a turn to enjoy the view from the top deck of the jeep (especially when we happened upon certain curious and, later, potentially deadly inhabitants of the “Sonoma Serengeti”), but this privilege is only bestowed upon those measuring at least 45 inches in height. 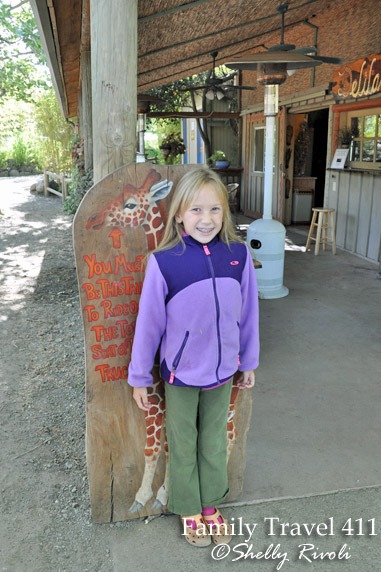 Passengers must be at least 45″ to ride on the upper level–whew!

Having confirmed these qualifications where necessary–and that everyone who needed to use the facilities one last time had, we boarded our safari jeep, settling into its three tiered bench rows on the lower level and solitary bench above (the only seating with safety belts). With water bottles, cameras, and wide eyes, we set out on our 2-hour exploration of Safari West Wildlife Preserve, set on 400 acres of rolling hills just an hour and a half north of San Francisco. 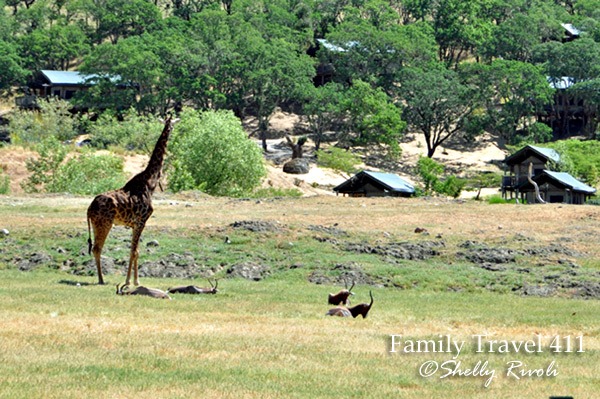 Setting off into the “Sonoma Serengeti” on our tour of Safari West Wildlife Preserve. 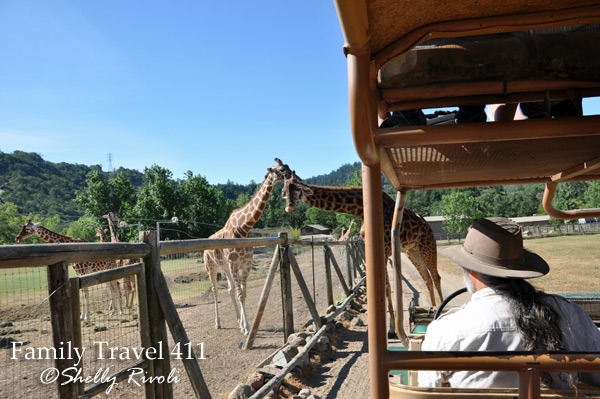 Within moments of passing through the first gate, we were alongside reticulated and Masai giraffe, with the Masai, which boast the title of the tallest land mammals on earth, on our side of the fence. Our guide, Robert, stopped the jeep a short distance away, and began telling us facts few might guess about giraffes, from the bizarre blood pressure that’s required to nourish a brain atop animals nearly 18 feet tall to what they are really doing in those cute photos where they appear to be “necking.” 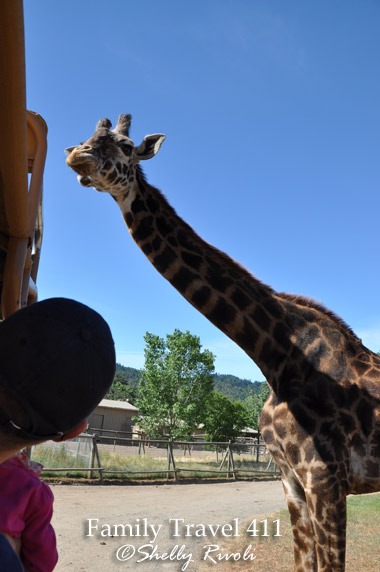 Heads up! The giraffes are getting a little curious about those new sun glasses…

Along with other details I never would have guessed about these creatures, I learned that a giraffe’s neck has only as many vertebrae as a human’s.  After a close inspection by a curious onlooker with a curious-looking black tongue, we rambled on. Soon, our guide stopped to allow us to rotate seats as he retrieved something from behind a stump on the side of the road. 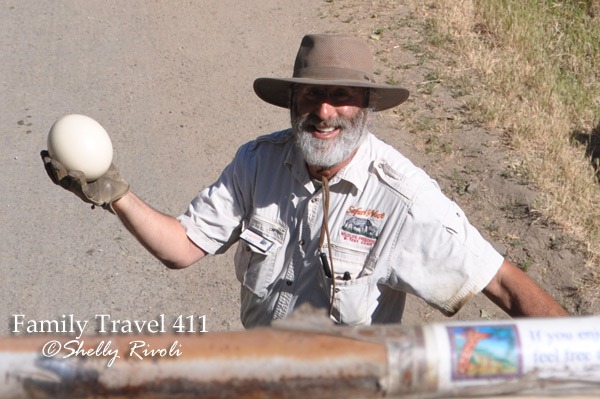 It was time to learn equally fascinating facts about the ostriches strutting behind the fence. Prolific layers, ostriches can lay their enormous eggs as often as every other day. One egg, weighing anywhere from 3 to 5 lbs., is the equivalent of one dozen chicken eggs where omelets are concerned. “Would anyone like to hold it?” 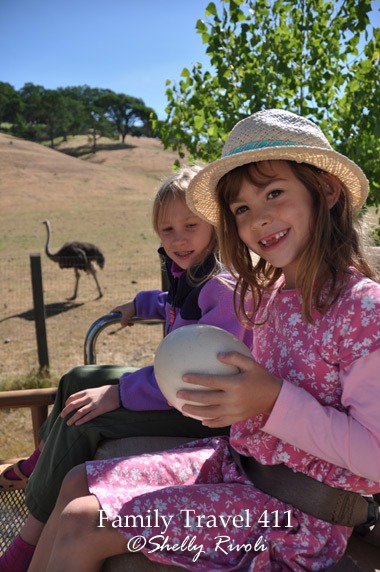 Holding this three-pound leathery wonder is still one of my daughter’s favorite moments from the tour of Safari West Wildlife Preserve.

The excitement of holding  a real ostrich egg was nothing compared with what many of us felt as we realized Robert was driving us up to–and then through–the gate into the field with the ostriches. As he set the brake on the jeep and returned to close the gate, it was suggested that we keep our hands to ourselves and make no sudden moves. 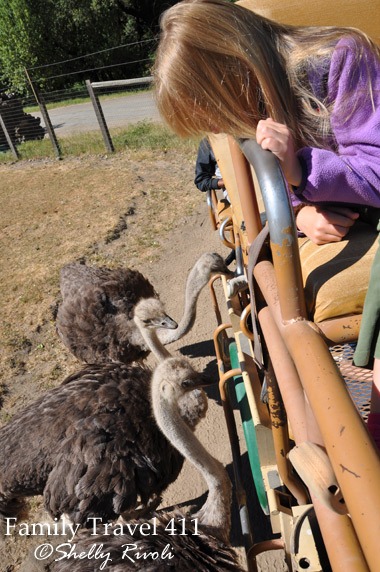 My daughters and I were very glad to be taking our turn on the upper level at this point, though I was a little concerned about my husband and son below.

Having been warned as a child that ostriches are extremely dangerous, I was concerned for the passengers below, but not enough to give up my seat on the upper deck. Ostriches were soon to be the least of our worries, however.

The road became more rugged and steep, and I was thankful to have the safety belts around my daughters as we lurched bobbed on the upper deck, which felt every rock and pot hole exponentially, until Robert slowed to a pause and drew our attention to something in the nearby shadows.

We’d happened upon the morning siesta of one of the deadliest mammals on the African continent. 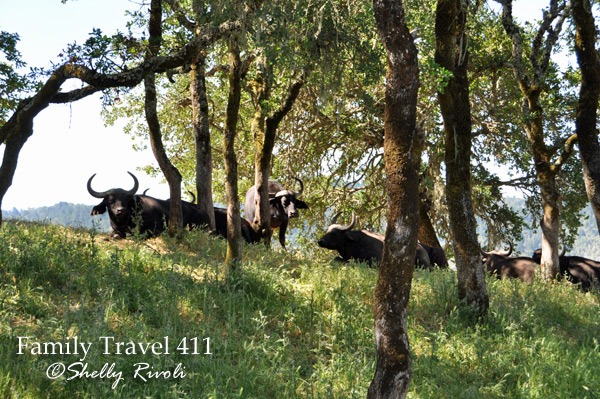 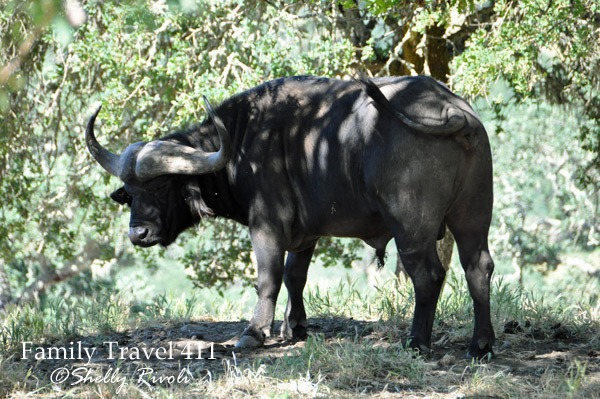 Male Cape buffalo grow a shield across the forehead for extra protection when fighting.

The Cape buffalo watched us watch them for a moment, then Robert eased the jeep a bit farther down the road, before stopping to tell us about these bullish beasts at a safer distance. They are more than just physically powerful.

The Cape buffalo has an amazing sense of smell and memory–two things that make it possible for it to hold a grudge for a very long time. Look forward to a great hair-raising story from your guide if you’re lucky enough to spot the Cape buffalo on your tour.

While there are no guarantees which African animals you may get to see during your Safari West jeep tour, I suspect that the earliest morning tours offer the best odds. We not only had the good fortune of crossing paths with a few zebras that morning; we couldn’t quite count them as they continued to appear from the shadows, mingled among themselves, meandered, and eventually surrounded our jeep on all sides–though seemingly oblivious to our presence. 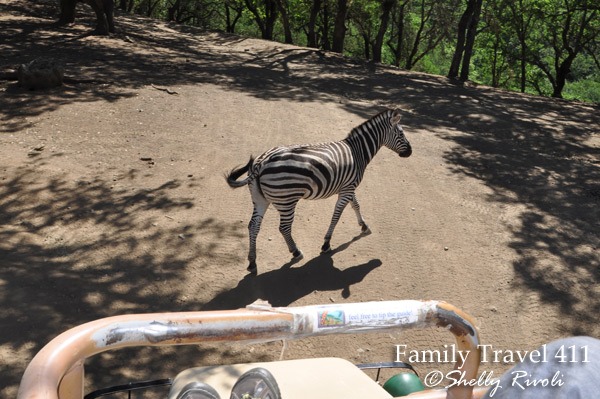 Stop the jeep! There’s a zebra! 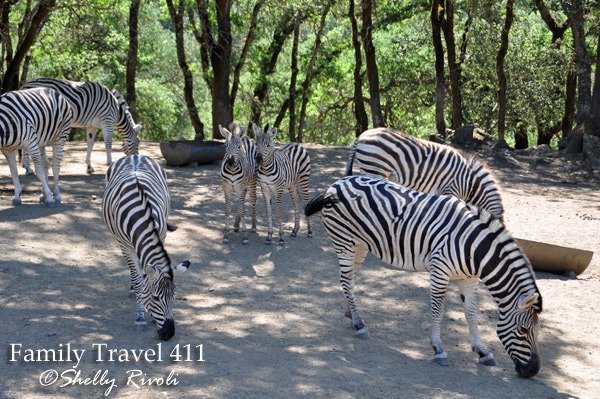 Are you seeing stripes yet? You can see how their camouflage helps hide them as a group–especially in shadows. 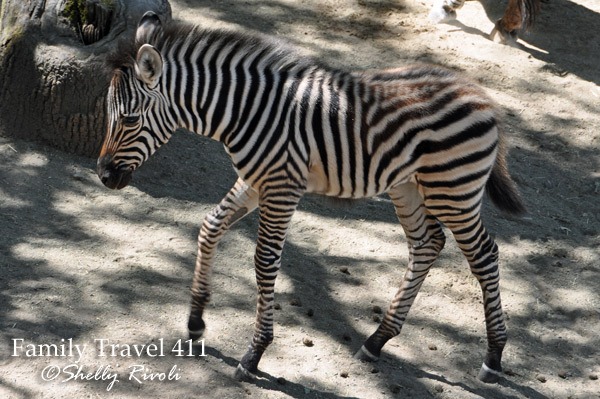 As you can also see, the zebra population is a growing success here!

We were all quite moved by the zebra visitation during our jeep safari, and I’m sure hundreds of photos were snapped. Eventually, the zebras began to wander off into the shadows, and we began to work our way back, slowly, toward the village at Safari West. But the animal sightings were not over yet. 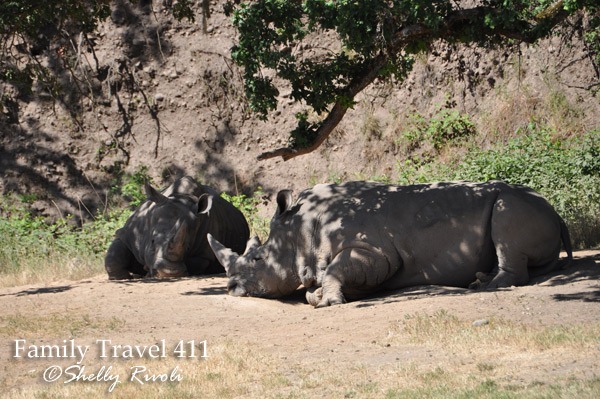 A pair of southern white rhinoceros snooze as we pass by. 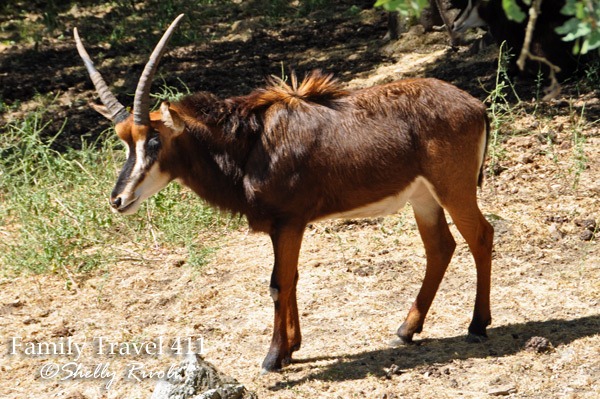 A young African sable dazzles us as we drive by.

The driving portion of our Safari West Wildlife Preserve  tour took more than two hours, though even the three-year-old girl in our group and my four-year-old son never seemed bored or antsy. We saw roan antelope, gazelles, kudu, a warthog, and then some, and unlike the self-drive wildlife parks you may visit, our experienced guide was there to educate and entertain us throughout.

After a pit stop and water break at the village, we continued on with Robert for the guided walking tour included with the jeep tour, calling on a resident cheetah and several other rescued animals living in fenced areas and enclosures. Walking through the African aviary was even more of a treat than I’d anticipated. 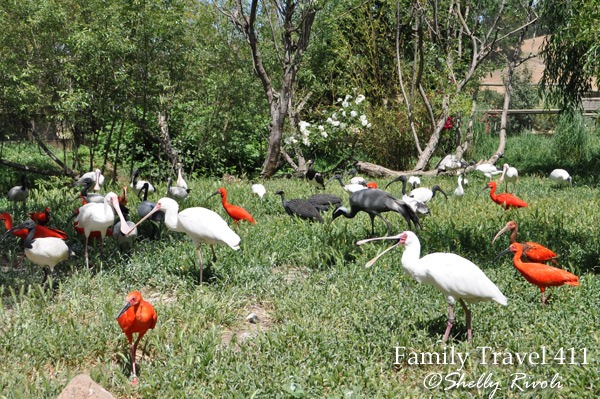 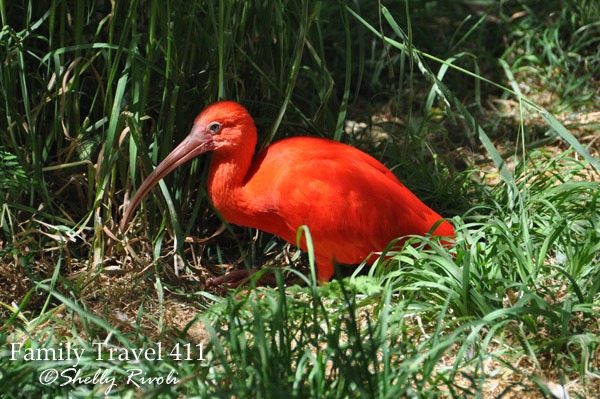 As a family of wildlife enthusiasts, it would be hard not to fall in love with Safari West. Not only is the guided jeep tour experience one of the most enlightening and enjoyable animal encounters we’ve had yet, but learning more about the accomplishments of the preserve and its commitment to wildlife preservation, “through breeding, education, research and public interaction,” was inspiring as well.

Oh, and did someone mention teen internships? Let’s just say I won’t be surprised if we’re back in a few years to visit one of our own “on the job” here.

Tips for planning your visit to Safari West, Santa Rosa: 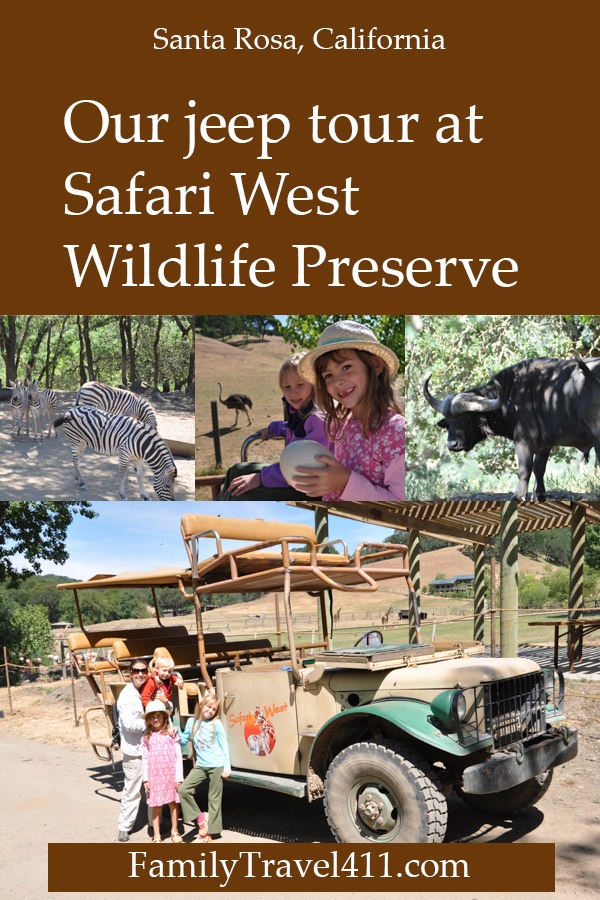 Tour Notes: Safari West’s African safari jeep tours are available 7 days a week, but you must reserve yours in advance (call 1-800-616-2659 or book online at www.safariwest.com). Children under 3 years are not allowed on the driving portion of the tour, but groups with a toddler may have one adult and the child join the group for the walking portion afterward for $25 for the adult (with no charge for the toddler).

Tour prices vary by season, ranging from $115/adult and $50/child on peak weekends (summer) to $93/adult and $45/child on winter weekends (discount for seniors). If you have flexibility, weekday tours cost less than those on the weekends. Also, overnight guests staying in Safari West’s African tent camp receive a reduced tour price. Other special offers and packages are available at www.SafariWest.com.

Getting There: Safari West Wildlife Preserve is 75 miles north of San Francisco, nearest the city of Santa Rosa, in the heart of Sonoma Wine Country. It may take anywhere from 1 hour 15 minutes in light traffic to nearly 2 hours to reach from San Francisco during commute times.

We drove past the entrance before seeing it, and many GPS systems are apparently giving false directions, so I recommend taking a look at the website’s directions from your starting point.

Practical Tips: You will be out on safari for at least 2 hours, and in the case of our early tour, I went from cool enough to be in SmartWool socks to sweltering in my vented UV-guard shirt. Dress in layers, bring your water, and make sure you’re armed with a fully charged camera with an extra memory card–you may need it.

Also, make sure everyone has had plenty to eat before you go and has used the restroom; there aren’t any facilities along the way (and you never know who might be hiding behind a tree!).

Dining: Delilah’s Snack Shop is open in late spring and summer months, with pre-made sandwiches and salads, popsicles, chips, and cold drinks including wine and beer. The Savanna Grill serves BBQ lunches and dinners at set times each day (changes by season), with dining indoors or on the outdoor patio (more in my Review of Safari West: One Night in the African Tent Camp).

Thanks to Safari West Wildlife Refuge and Safari Tent Camp for hosting my family and providing this opportunity to review their accommodations and tour. For more information about Safari West’s guided safari tours, overnight accommodations, packages, and special offers, visit https://www.safariwest.com/. An earlier version of this review appeared June 3, 2014, and has since been updated.

One Night in the African Tent: A Review of Safari West Wildlife Preserve

Ten Things You Should Pack for a Road Trip with Kids