Review of the Spa Claremont at the Claremont Hotel Club in Berkeley, California.

In honor of my birthday, I was surprised with the generous gift of an afternoon at the Spa Claremont,  one of Elle magazine’s “Top 20 Spas in the U.S.” and National Geographic Traveler‘s “24 Best Spas in America.” The Spa Claremont is tucked neatly into the lower levels of the landmark Claremont Hotel Club in Berkeley, near the east edge of San Francisco Bay.

Although The Claremont gives hotel guests–and spa guests alike–complimentary child care seven days a week (2 hours free for one child 6 weeks to 2 years old or 3 hours for one child 3 to 10 years; advance reservations are required), I was very happy to skirt the afternoon school pick-up ritual and head off solo to the spa.

My “momcation” at the Spa Claremont would include an hour and a half of pre-spa pleasures, a 50-minute therapeutic massage, a spa pedicure, and a manicure–all of which sounded like strong medicine to this maxed-out mom who’d been breakfasting on the crusts of children’s sandwiches in front of the computer after surviving the launch of a book.

I was more than happy to accept the “Claremont cure.” 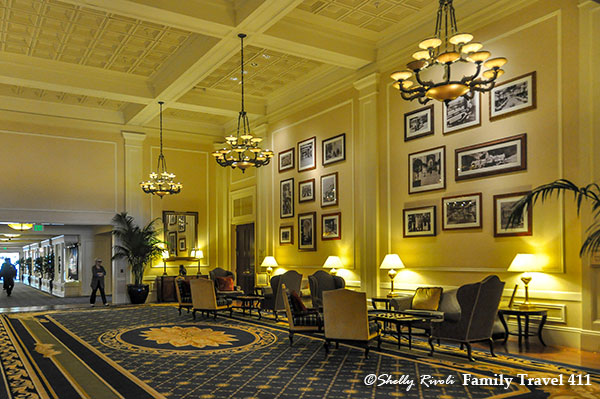 Be sure to peruse the photos in the lobby of the historic Claremont Hotel in Berkeley.

On arrival at the Claremont Hotel Club & Spa, early that Friday afternoon, I grabbed my parking stub and began the search for an open parking space.  Sure, my pre-spa clock was ticking, but if you’ve never been to the Claremont , counting down to its 100th official birthday with a history stretching beyond that, I suggest you arrive even earlier to allow some walking-around time. The lobby itself is deemed to be the largest of any hotel on the West Coast, and the gallery of historical photos displayed on the walls only help to set the mood. 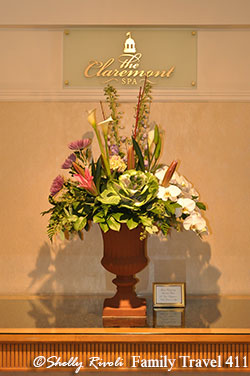 Checking into the Claremont Spa and checking out from reality…

Once I found my way down to the Spa Claremont entrance and checked in for my “treatment,” I was given a quick tour of the facilities, spa slippers in my size, and a wrist-corded key to my locker. Donning just the spa robe, key, and slippers (don’t expect to see swimsuits here), I ventured out for a quick rinse in one of the most intimidating showers I have ever seen.

In a private stall, I was met with more shower heads than I have fingers. I tried to count them all, then tried again and got a different sum. There was one lever on the left, a second lever on the right and a third lever that was, thankfully, labeled: “Lower.” I decided the latter would be safest to start with, especially since I stood in the direct line of fire while adjusting the temperature. Suffice to say that in a matter of seconds I was adequately sprayed, soaked, all-but-fire-hosed and ready for my next stop in the pre-spa adventure: the much touted Spa Claremont whirlpool.

Gentle readers, please note: The square whirlpool at The Claremont is an above-ground affair, meaning that–once disrobed and de-toweled–you will ascend enough steps to compensate for its depth before making a grand entrance down corresponding steps into its swirling center. If you are shy, this could be your moment of truth. I, myself, wasted no time submerging myself to my shoulders between the chattering bridesmaids to my left and the senior ladies soaking in dignified silence on my right.

I settled in to my space and leaned my head back, finding that the ledge above the water was perfectly placed for support. Once the par-boiled bridesmaids shuffled on up, over, and out of the whirlpool area, I further investigated the matter of the “San Francisco skyline view,” which I did not see as I entered the whirlpool.

Though the Spa Claremont literature boasts this view from the whirlpool, and a current photo of the whirlpool on their website shows downtown San Francisco through the window, the primary view I saw in this moment was the row of palm tree crowns just outside.  As I experimented with different locations in the whirlpool, the most I could see between the trees was one half of the Golden Gate Bridge. Fortunately, I had not come to the spa for its view of San Francisco Bay.

Sufficiently soaked, it was time for another super rinse, followed by a visit to the steam room. Let’s just say, I’ve seen steam before, but as I entered the steam room at the Spa Claremont, I could only see steam. I had to wait a moment as the freshly dispensed vapor settled to see where there were and were not other spa goers already seated. It was impressive. And effective. Fortunately, there was a lovely ice water dispenser with cups awaiting just outside the steam room’s door. I used it–and the steam room, and the showers–many times before one final dip in the whirlpool. 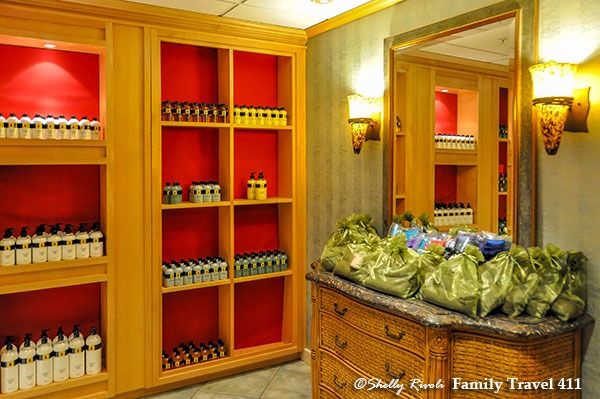 Warning: Your inner shopper may be tempted to take a bit of the Claremont Spa home with you…

Before I knew it, it was time to re-robe and await my massage in the well-lit ladies’ waiting area, where mothers and daughters and bridesmaids sipped citrus-infused water and giggled over magazines, awaiting their own treatments. I was quickly called and led down the hall to my quiet massage room. Feeling the effects of so much steaming, sweating, and spritzing, I gladly slathered myself across the massage table to do that thing I haven’t managed to do quite enough of in recent years: snore.

I passed the next 50 minutes adrift between varying states of consciousness, turning only when told, and recognizing occasional strokes of Hawaiian lomi-lomi between daydreams of packing school lunches–which I quickly snuffed out–and memories of leaping into the hidden Venus Pool near Hana. Needless to say, it was over too soon. Yet I still had a manicure and pedicure to enjoy? O, happy day!

For the pedicure, I was advised to stay in my spa robe, and I was happy to oblige. In a bright, sunny room, I was met with another cup of citrus-infused ice water and, in the spirit of the moment, I selected a brighter tone for my toes than they had seen in many years. The foot bath swirled, the chair pulsated and  I opened my book for the next installment of the tome I’d lugged along to enjoy: Paul Theroux’s The Last Train to Zona Verde. As the esthetician sanded callouses and confirmed my choice of Electric Coral nail polish, Mr. Theroux did his best to burn away fly-borne diseases from a piece of chicken using a cigarette lighter and a modest pile of grass.

A few pages later, I closed the book, accepting that my late-night reading at home was ill-suited to my birthday afternoon at the Spa Claremont. I simply could not keep one foot in the Claremont’s pedi-bath while keeping the other in Theroux’s Africa. As my ankles and calves received a second massage, the latest issue of O magazine was cheerfully delivered to my throne. 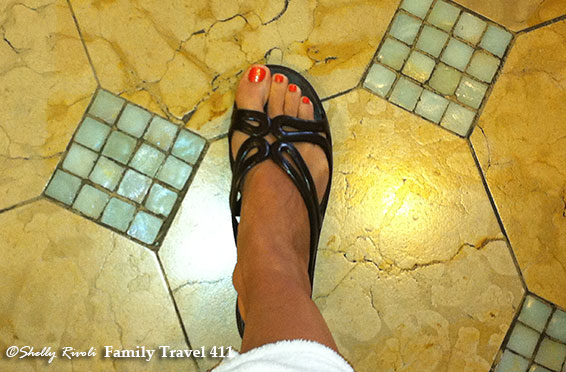 A fresh pedicure at the Spa Claremont in Berkeley.

Toes polished, I was escorted back to the ladies dressing room where I would surrender the spa robe and slip back into the street clothes I’d arrived in before the manicure (no sense in ruining a fresh manicure because of a dodgy zipper). Thoroughly confused by the maze of hallways and stairs I’d traversed between episodes of decadence and bliss thus far, my new nail artist led me to a final room I hadn’t yet visited. It was dark, small, and perfectly sufficient for the work at hand: a French manicure to follow my catnap in warmed mittens of paraffin.

By the time I sauntered out of the Claremont, it had been four full hours since I’d arrived–long enough to forget exactly where I’d parked my car in my hasty arrival. It didn’t worry me a bit though. Few things could after an afternoon’s “momcation” at the Spa Claremont.

Be sure to check the Claremont Hotel Club & Spa site for current special offers at the spa and hotel packages: http://www.claremontresort.com.

Remember, the complimentary (and paid) childcare is only available when booked in advance, so be sure to call ahead to avoid disappointment.

Tip: Certain days of the week, you may be able to get additional pre-spa time. Call ahead to confirm just how much time you’ll be able to enjoy on your visit.