Come along on our family’s Northern California glamping adventure at Safari West Wildlife Preserve and African Tent Camp in Santa Rosa, California. Full review with details of our stay to help you plan your own family’s visit follow — and don’t miss the follow-up with our jeep tour: On Safari in Sonoma ! 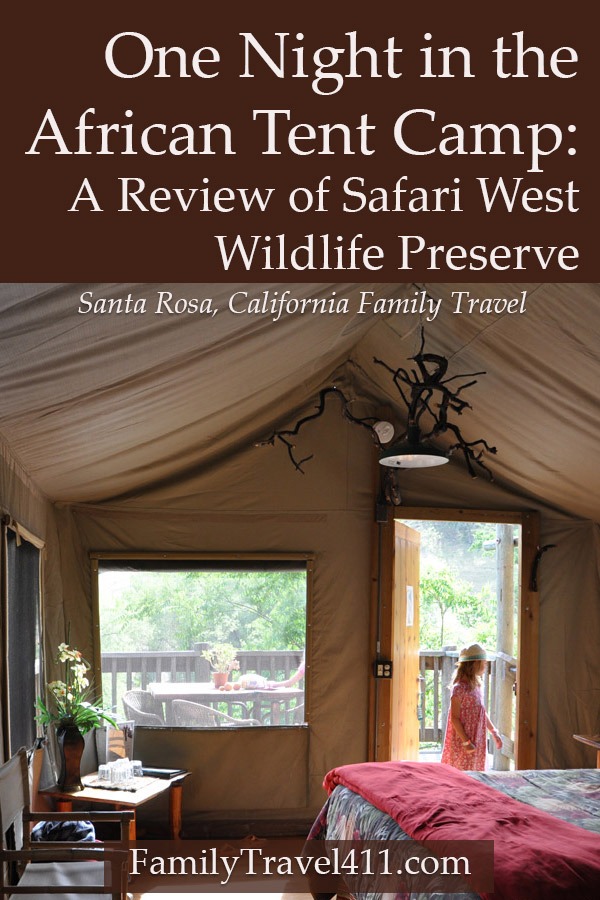 ONE NIGHT IN THE AFRICAN TENT CAMP….

That the wood floor was polished to a higher luster than ours at home was the first sign there would be no roughing it in this particular tent. A king-size bed was the second.

And the presence of a private bathroom with a shower behind the children’s queen-size bunks clearly argued that our lodgings at Safari West Wildlife Preserve were more “cabin” than “tent,” although our walls and ceiling were no more than canvas and our windows a breezy mesh. (Ahhh…. glamping!) 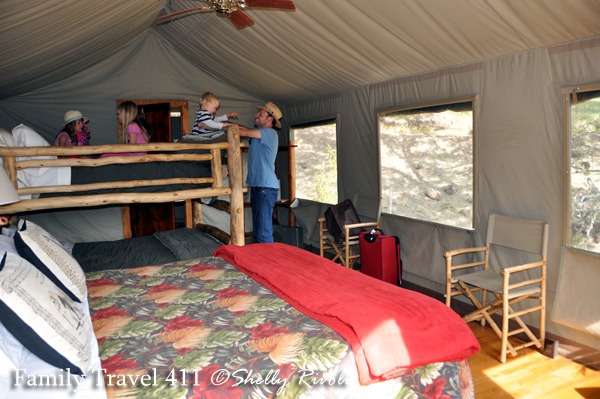 Plenty of room and beds to sleep six in our Deluxe Hillside Family Tent at Safari West Wildlife Preserve.

Perched on our lake-view porch amid the oak tree tops, we raised two glasses of a local Zinfandel, admiring the view from our temporary home on stilts. I whispered, “No worries of a snake crawling into this tent cabin, dear—no matter what the kids try to tell us.”

We exchanged quick grins before retrieving the dry salami and cheeses we’d packed along from the tent’s ice chest, and called the kids who—now having conquered the hand-hewn bunks and confirmed the toilet in our tent really flushed—were busy chasing lizards and butterflies beneath our hillside dwelling. 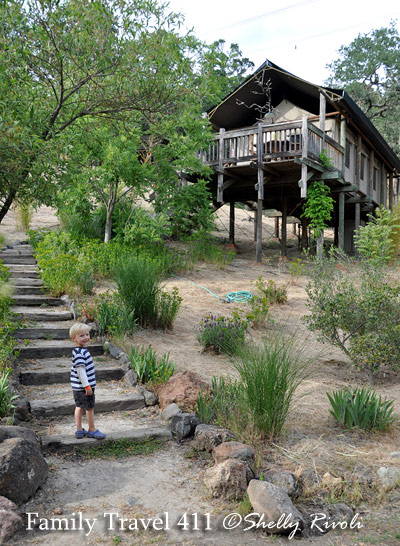 Many steps, many stops to view skittering critters along the way.

I’ll admit I was a little disappointed during the escorted jeep ride up to our cabin when I realized we would not be staying in one of the tents I’d seen advertised with a porch view of giraffes. I’d already taken the photos in my mind, and who doesn’t love giraffes?

Yet, as we shuffled the deck of Uno cards with an exotic rumble in the distance, and watched another iridescent bird of mystery flit to the treetop beside us, we had to admit this lakeside location, at the farthest edge of the tent cabins, was ideal for us. 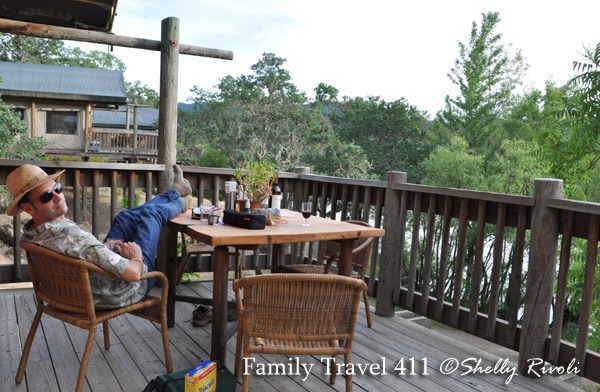 Lakeside porch or hillside perch? Happy to be here either way.

Our driver, upon delivering us to our tent and carrying our bags up the several steps, gave us helpful tips and specific instructions to ensure an enjoyable stay.

1) Carry our flashlights to dinner—it will most likely be dark on our way back.

2) To stay cozy in our tent, close the window flaps before it gets cold, and keep the door to the bathroom—which had open mesh for a ceiling—closed during the night. 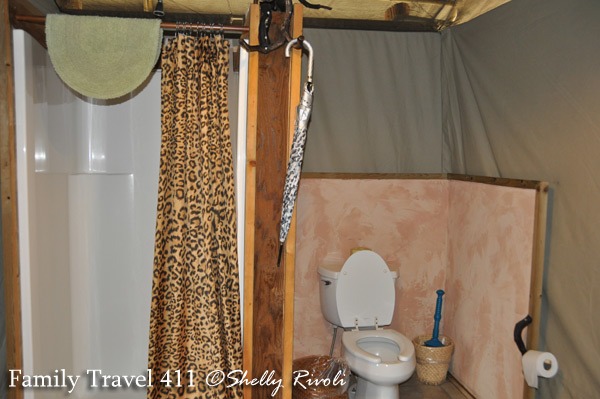 3) If it gets really cold, which seemed unlikely as I felt the sweat trickle down my neck and watched my son crack open his second bottle of water in under 5 minutes—we could turn on our electric space heater and use the ceiling fan to force the warmer air down towards us.

“And if you’re still too cold in the night” (I think at this point I laughed out loud), he pointed out, “each bed has an electric blanket.”

Well, have no fear of snakes or getting too cold at night in this tent. Or too hungry, I thought, looking forward to our dinner at the Savannah Grill. The concept of “Sonoma County glamping” was definitely growing on me.

After our snack, we would take a stroll back down to the Safari West village and get a closer look at the flamingos, lemurs, cheetah and other animals residing there, all before the family-friendly happy hour and buffet dinner at the Savannah Grill (included with some packages or $29 adults / $17 kids 4 – 12, reservations required). 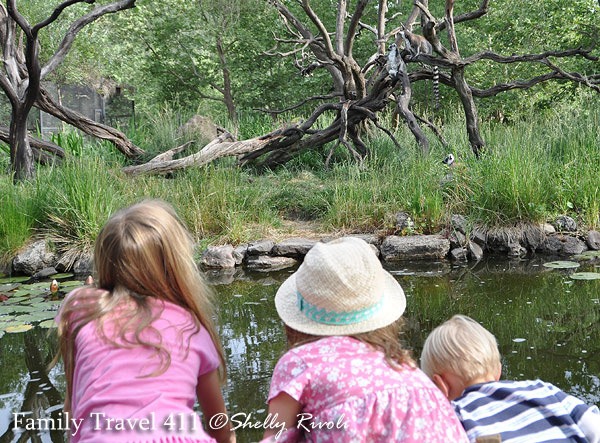 At Safari West, a pack of lemurs rule their own small island – one of the first things you’ll see when visiting the preserve.

The one do-over from our Safari West stay:

Our one mistake, however, was arriving on the later side for dinner, which is promptly served at 6:30 p.m. The line was long and the kids, having skipped the happy hour snacks and refreshments in favor of extending their visits to Fennec Fox and Felis Serval, were hungry. Trying to help them make their selections of unfamiliar dishes and juggle their plates in addition to our own was almost as challenging as finding something other than fruit for my pickiest eater to eat.

It’s not to say there wasn’t a wide selection of food at the buffet, or that the chicken and beef grilled Serengeti-style and salads weren’t enticing to me. It just would have been helpful to have a few more bland options for those young children who don’t recognize the lumpy (though delicious) homestyle macaroni and cheese by its name. Plain pasta or plain rice would have been helpful here. However, what the kids may have lacked in dinner they soon made up for in desserts. 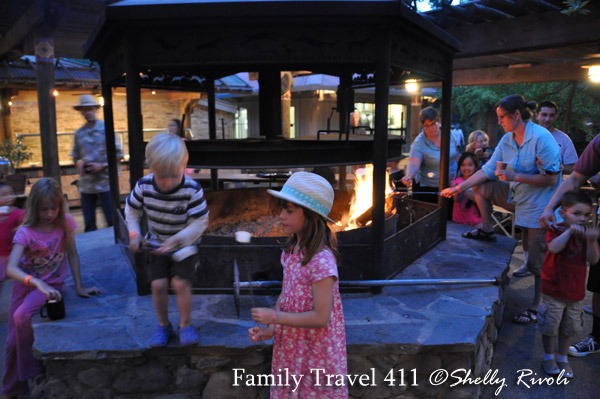 Roasting marshmallows after dinner at the outside grill. And yes, there is hot chocolate to go with it, too.

After freshly baked bread pudding with whipping cream and a cherry on top was delivered to all of the tables, the child guests were invited to come out and roast marshmallows over the glowing coals of the enormous grill. What kid could resist? Not one in my camp.

We strolled back toward our tent by way of reticulated giraffes and African crested cranes, glad to have the flashlight as it became darker and darker… and the kids spotted their first Sonoma-size toad. A new wildlife adventure unfolded as my husband and I took our seats on the deck, admiring the first stars shining above as the kids admired amphibians emerging below. 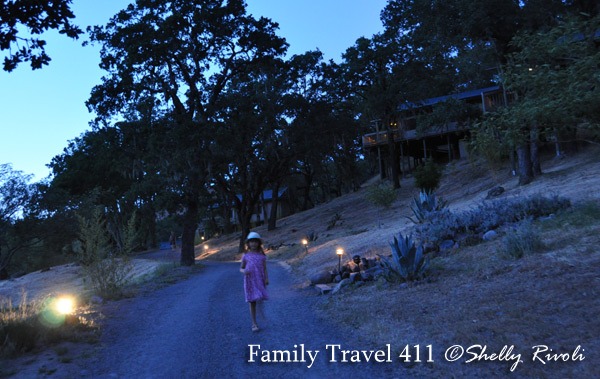 Solar lamps help light the way after dinner, but you may still be glad to have your flashlight for the steps–and nightlife–along the way.

“Do you think I should start closing the windows?” I asked.

He chuckled. “You really think it’s going to get cold tonight?”

“I don’t know, it is pretty clear out. What’s our elevation?” We stepped in to the tent and took a closer look at the large canvas flaps and Velcro tabs. “Well, it’s not like it will obscure the view now—you can’t see a thing out there.”

That’s when the first child screamed.

And as the third child shouted, “SNAAAAAKE!” we could see them all standing at the bottom of the steps closest to our tent cabin door, their flashlight fixed on something.

“SNAAAAKE!” they all shouted, but without the hint of terror in their voices that I felt in my bones. How could there be a snake out at night? When it was cooling down? When snakes are supposed to be back in their sleeping dens and far, far away from our feet?

“Is it dead?” I asked optimistically.

The kids assured me—and all of our tented neighbors within three quarters of a mile—that the snake was not dead. “And it has something in its mouth!”

A garter snake, I assured myself. I’m sure it’s just a harmless garter snake. But as I took a few steps closer, I could see this was no type of snake I had seen in the wild before. Not that I go looking for them. And it did have something in its mouth—or rather, hanging out: frog legs.

I have since learned this frightening snake is the California King Snake, and is actually nothing to be afraid of at all. Unless you are a frog.

As exciting as it all was, it was soon time to brush teeth in our gleaming copper basin in the tent’s bathroom which was, with certainty, getting colder. We shut the door to the bathroom, closed our window flaps, tucked ourselves into each cushy bed, and turned out the lamp on day 1 at Safari West. In the morning, we’d have to rise early to get breakfast back at the Savannah Grill (included with with overnight stays), before our 2 ½ hour double-decker jeep safari.

Dreams rolled over me and away again, and in between each I surfaced just long enough to catch bits of distant conversations punctuated by a deep and chesty “OOOOOHRAH! OOOOOHRAH!” and warbled “HOOO-HOO-HOO-HAW!” and I couldn’t be sure which speaker was native to my continent and which, if any, was not. But it didn’t matter.

I was warm and toasty in my bed, in an authentic African safari tent brought all the way from Botswana. We may have been just an hour and a half away from our home by San Francisco Bay, but in the hills behind us slept the zebras, wildebeests, and Cape buffalo we’d go searching for tomorrow. I knew my kids were thrilled to be there overnighting in the African tent. And best of all? I was, too.

Next up: Photos from our 2+ hour guided safari at Safari West

Thanks to Safari West Wildlife Refuge and Safari Tent Camp for providing this opportunity to review their accommodations and tours. For more information about Safari West’s guided safari tours, overnight accommodations, packages, and special offers, visit https://www.safariwest.com/ An earlier version of this review first appeared May 22, 2014, and has since been updated.

On Safari in Sonoma: Our Jeep Tour of Safari West

Tips for Buying Sunglasses for Kids

Ten Things You Should Pack for a Road Trip with Kids

Nine Amazing Family Vacations Abroad + Tips for When You Get There