SANTA CRUZ ISLAND with KIDS – Santa Cruz is one of four islands in the Galapagos that is inhabited by humans. Set bang in the middle of the archipelago, this volcanic island – shaped a little like Australia, yet only half the size of Sydney – is the tourist hub of Ecuador’s ‘Enchanted Islands’.

It’s relatively easy to get to (through Baltra Airport in the north and the Port Ayora in the south) and with plenty of accommodation options and a multitude of wildlife-viewing opportunities, Santa Cruz makes an excellent land base for families prone to seasickness and looking to avoid a cruise.

The island emerged from the sea millions of years ago as a jet of hot molten rock. Today its cactus-studded coastline and densely vegetated interior showcase all the forces that transformed a pile of barren rocks into a biological wonderland, changing our understanding of life altogether. 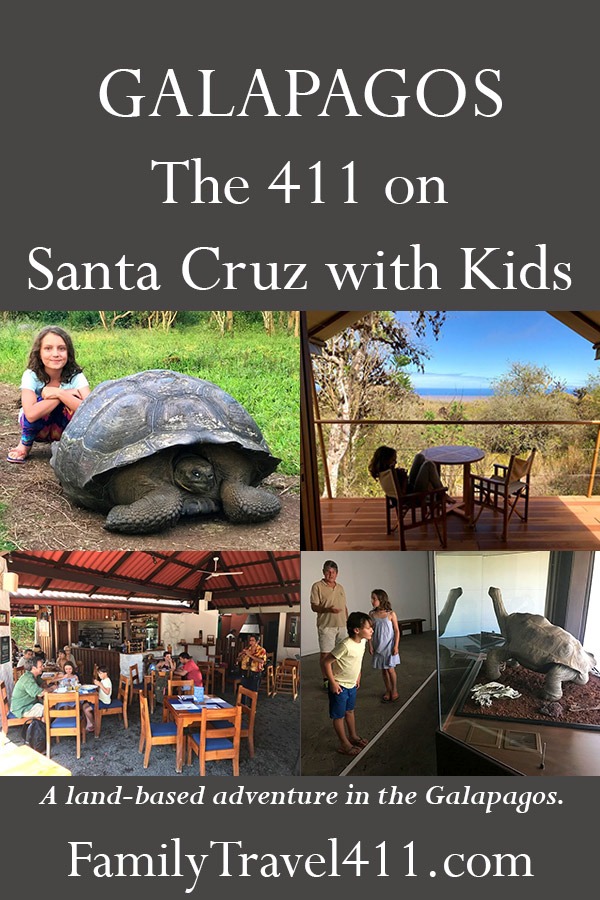 But the island’s oddly assorted cast of characters makes a trip to this remote Pacific island so memorable for kids. From salt-spitting iguanas and wide-eyed sea lions to lumbering giant tortoises and dancing boobies, aspiring Attenboroughs find Santa Cruz a paradise.

To get the most out of your visit to Santa Cruz Island with kids, here are four fun activities, one family-friendly place to stay and one great place to eat. 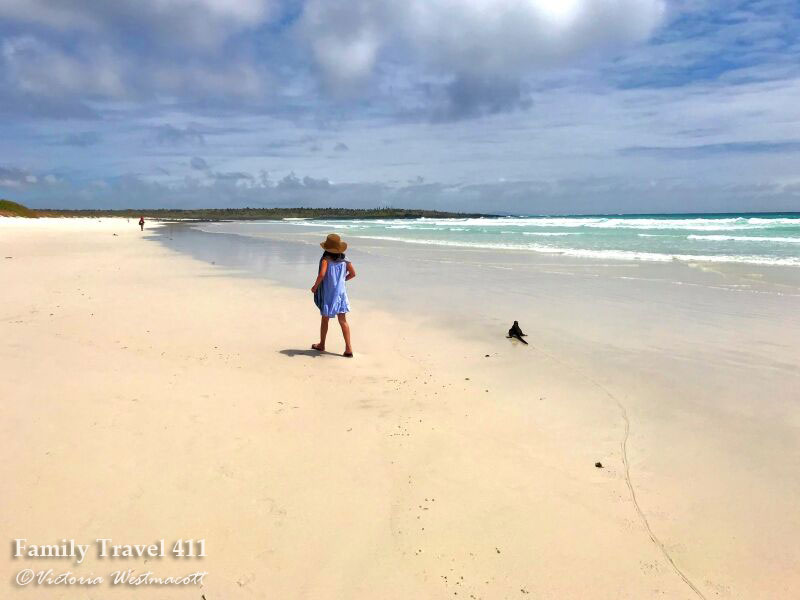 Strolling the beach with a marine iguana. Does it get more Galapagos than that?

On the southern coast of Santa Cruz you’ll find Tortuga Bay, easily one of the most spectacular beaches in the Galapagos. Not to mention, it recently claimed fame as TripAdvisor’s 10th Top Beach in the World. This remote strip of coastline can only be accessed by boat or on foot (a 50-minute walk on a paved trail from Puerto Ayora). Its powdery, pale white sands stretch for over a kilometer. But best of all, they and are flecked with dozens of dark grey marine iguanas performing sun salutations–a magical experience for anyone visiting the Galapagos with kids.

Endemic to the Galapagos, the marine iguana is the only lizard in the world to have adapted to sea life and is an excellent example of how animals modified themselves to survive in these volcanic, infertile lands. Although it’s tempting to follow the iguanas into the translucent waves, the strong currents make Tortuga Bay a dangerous spot for swimming.

Tip: Bring plenty of water and snacks as there are no shops or restaurants here.

Activity 2: Discover the Land of the Giants 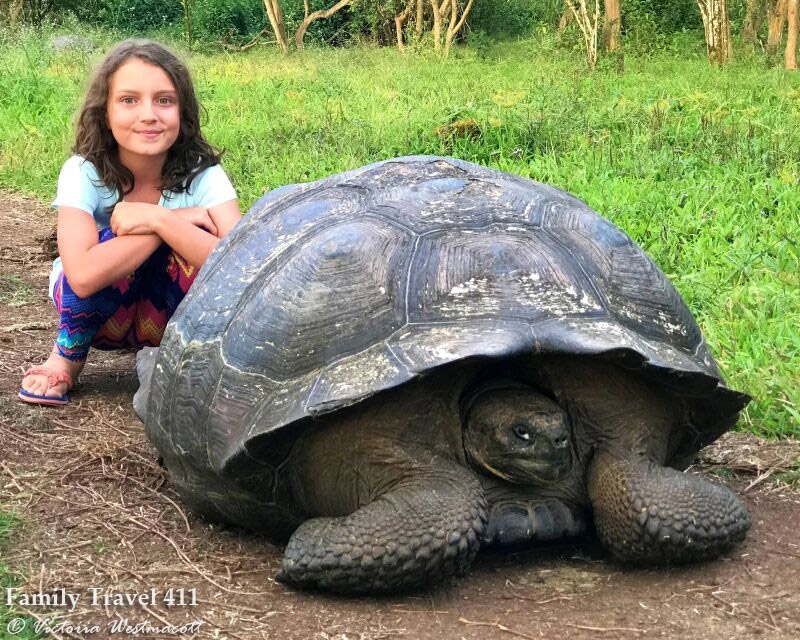 The highlands of Santa Cruz in the center of the island have become a sanctuary for one of the Galapagos’s most iconic inhabitants, the giant tortoise. These prehistoric-looking creatures not only gave their name to the islands (Galapago means tortoise in Spanish). They are the species that first alerted Darwin to differences between animals on different islands. (The British vice-governor of the islands told Darwin he could tell which island a tortoise came from just from the shape of its shell).

Some of the best giant tortoise watching in the wild can be found in El Chato Tortoise Reserve. Near the village of Santa Rosa, you can find dozens of them slowly navigating their way around mounds of tall grass or wallowing in muddy lagoons. In contrast to the arid lowlands, the vegetation here is thick, green and often shrouded in mist. All of which provides an ideal habitat for these elephantine reptiles whose ancestors were carried to the Galapagos on rafts of vegetation from the rainforests of South America.

The tortoise reserve also has a number of underground lava tunnels that are fun to explore and at the end of the tour, kids can crawl inside an empty shell of a giant tortoise – cameras at the ready! Find out more: El Chato Tortoise Reserve

Click the upper right corner to open this map in a new window. This feature continues below… 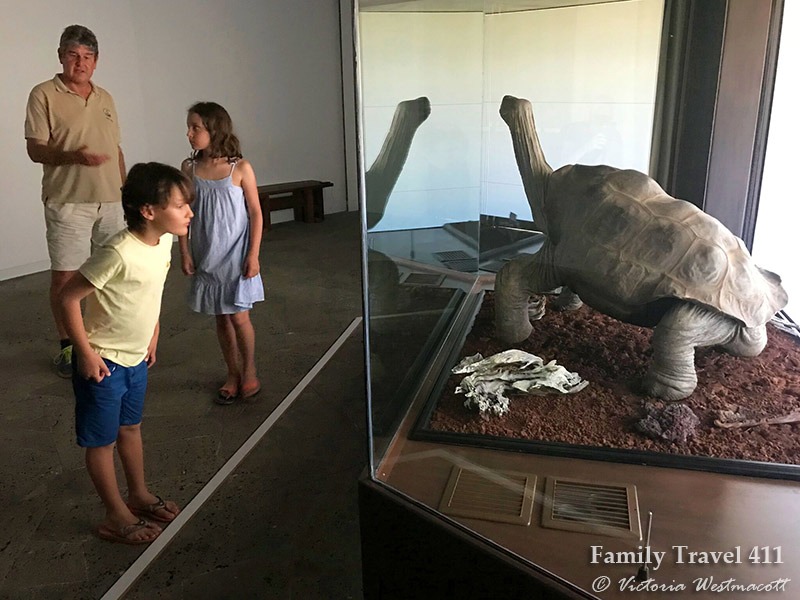 Besides Darwin’s groundbreaking revelations, one of the most remarkable wildlife discoveries ever made took place in 1972 on Isla Pinta, the northernmost island in the archipelago. The discovery of a male Pinta tortoise, a species presumed extinct in 1906, rocked the scientific community. (Hunting and human introduction of invasive species such as goats, rats and pigs had destroyed the tortoises’ natural habitat).

Park rangers transported the surviving tortoise to a protected reserve in Santa Cruz where they named him Lonesome George. When he died in 2012 he had become a global conservation icon. His body, preserved by taxonomists in New York, can now be seen on display at the Charles Darwin Research Station in Puerto Ayora. He remains a symbol of hope for endangered species around the world.

That idea perplexed my daughter – how is being the last of one’s kind hopeful? – and she asked the guide about it. That prompted an interesting discussion about how the Galapagos Islands are a marvel of biodiversity and what happens when humans upset the delicate balance of our planet. Find out more: Official site of The Charles Darwin Research Station

Activity 4: Hang Out with the Local Hustlers at the Fish Market 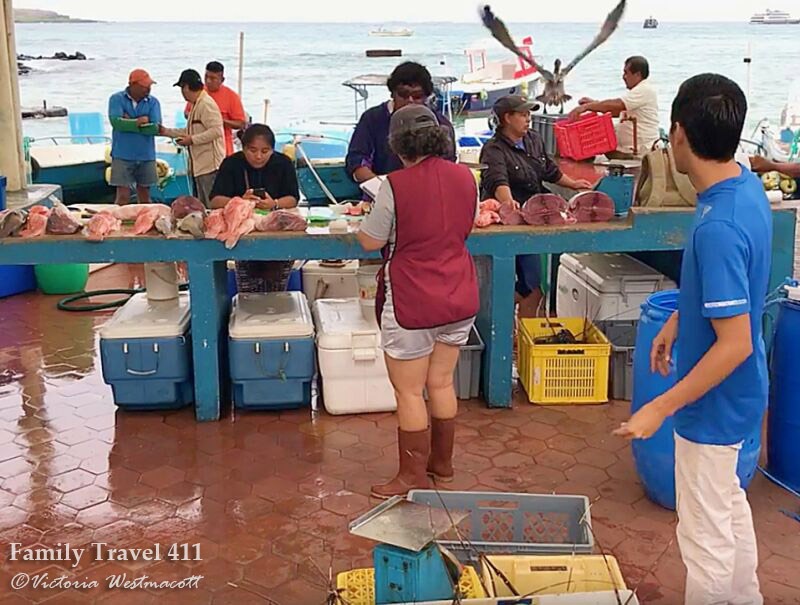 The Galapagos Islands are one of the few places in the world where wild animals show no fear of humans and there can be no better demonstration of this than at the fish market in Puerto Ayora. Sitting at the water’s edge, this tiny, unassuming market is little more than a long concrete slab. Yet that slap is laden with hefty tuna, shiny snapper, and crates of scrambling lobsters.

What makes it special is the crowd it attracts. Locals from all over Santa Cruz Island gather here daily to pick up their dinner. That includes, much to the delight of tourists, locals of the non-human kind. Sea lions sidle up to the counter and, watch closely. When backs are turned, will snatch whatever they can reach before hot-flippering it down the street.

Beady-eyed pelicans swoop in from the skies, scooping up whatever they can get away with before being swatted away by irate fishmongers. Children find all of this hilarious, and you don’t need to make any purchases to get immense entertainment here.

Tucked away in the central highlands, between Santa Cruz’s two main ports, the secluded Galapagos Safari Camp makes an ideal base for families looking to the escape the crowds and fully immerse themselves in the wilds of the Galapagos. The eco-luxe camp sits high on a ridge overlooking dense canopy of the National Park and the Pacific.

Families can opt to stay in the spacious three-bedroom family suite that sits above the kids’ club. Or if they prefer, in one of the nine teak-floored safari tents. Raised high above the ground on wooden platforms, the tents are light and airy. There’s ample room for a family of four (age limits apply). And for for birdwatching-in-bed, simply roll up the large flaps in the canvas walls (highly recommended!). Plus, sliding glass doors open on to private balconies where you can soak up a misty sunrise, coffee in hand.

In the highlands, temperatures are cooler at night, making it ideal for visitors to Santa Cruz Island with kids–or without. That means mosquitoes are seldom a concern and air conditioning is, thankfully, not required. During the cooler season, staff light fires in the main lodge. And don’t be surprised to find hot water bottles under bed sheets once you return from dinner.

It’s notable enough to be the only hotel in the archipelago with a kids’ club. But what makes Galapagos Safari Camp especially family-friendly? The founders raised their two children here. Stephanie Bonham-Carter and Michael Mesdag know first-hand what it takes to create engaging, educational experiences. They created a special six-night ‘Family Safari’, designed to meet the needs and interests of every member of the family.

Foodies will also enjoy the meals here. Like every service the hotel offers, the menus can adapt to meet specific needs. Find out more: http://www.galapagossafaricamp.com/ 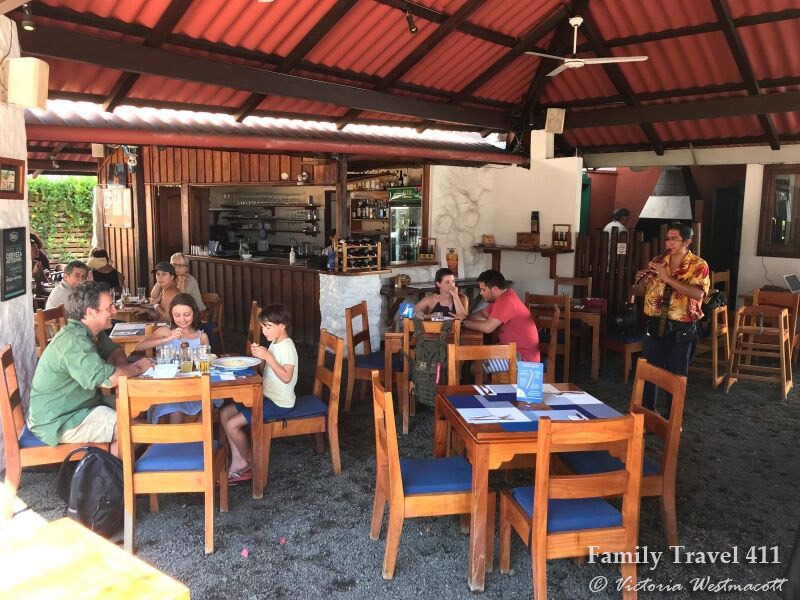 Looking for a great place to eat while visiting Santa Cruz Island with kids? Just a five-minute walk from Puerto Ayora’s main jetty is La Garrapata; it’s one of the oldest restaurants in the Galapagos and one of the most popular on Santa Cruz Island.

Located on the water’s front, this rustic, open-aired restaurant ticks all the boxes bar one: it faces the street. But don’t let its view put you off! (Or its name, for that matter: garrapata is Spanish for ‘tick’, as in the blood-sucking parasite).

Seafood is the star attraction here. Try it grilled, steamed, fried or bathed in coconut or pepper sauces. What’s more, you’ll find pasta and meat options as well, ensuring there’s something to please everyone. Find out more: La Garrapata

The 411 on Peru’s Sacred Valley with Kids

The 411 on Panama City, Panama, with Kids

Ten Ways to Live Like a Local Family During Travel

The 411 on Oaxaca with Kids

Victoria Westmacott writes at farflunglands.com, a family travel blog dedicated to experiential learning and transformational experiences. Victoria likes to look beyond the traditional family-friendly resort, theme park and 'fly-and-flop' beach holiday to far-flung lands where kids can be safely removed from their comfort zones and immersed in cultures significantly different from their own. This, she believes, is how children (and adults!) learn best. Together with her husband and two children, Victoria has lived in USA, Vietnam, India and Panama. She is currently based in Quito, Ecuador. Follow her on Twitter @farflunglands, Facebook @farflunglands and Instagram @farflunglands

Ten Tips for a Smoother London Vacation with Kids