Into the Everglades: A Post-Hurricane Airboat Adventure at Sawgrass Recreation Park

There they sat, lined up like well-behaved hounds whose hind-ends never move more than an inch from the spot where they’ve been told to stay. Yet all the while their noses stretched forward as far as manners would allow–testing the air, tasting the adventure they knew awaited just around the bend.

The airboats at Sawgrass Recreation Park seemed to me just the right size for exploring the Everglades: too big to be swallowed all at once by an agitated alligator, yet small enough to provide the agility one might need when navigating reptilian habitat at high speeds. 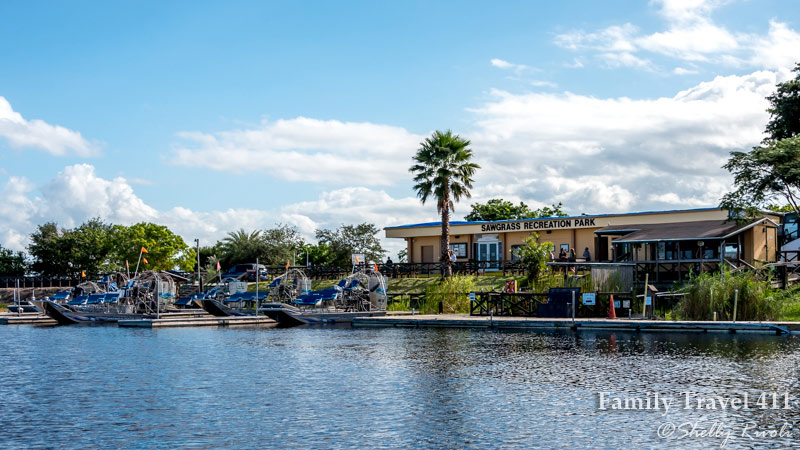 Though there was one apparent feature of the vessel that had me concerned. It sat awfully close to the water. Whatever I happened to see from the front corner optimal photo-shooting perch I’d claimed might require far less zooming than I’d anticipated. 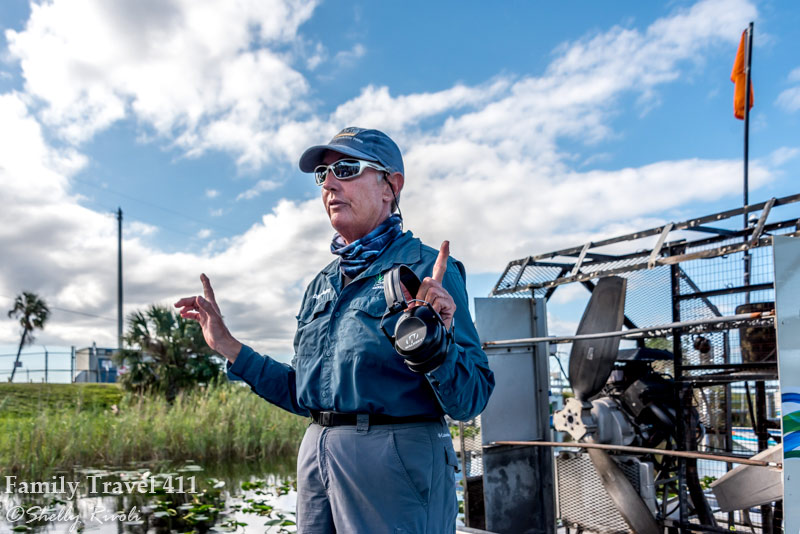 Not to worry. We soon learned our captain, Debra Dietle, had been driving airboats in this area for more than twelve years. If she wasn’t worried about an alligator climbing aboard, or eating my long lens for lunch, I reasoned that I shouldn’t be either. After a quick safety talk and introduction, and the distribution of foam ear plugs, we were ready to venture out into the legendary River of Grass. 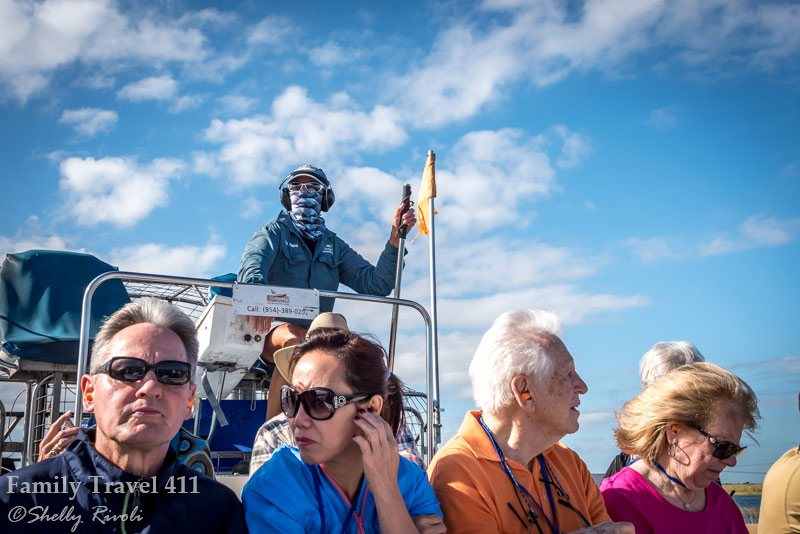 Our airboat hummed and hawed at yet higher speeds as our cheek flesh finally felt the force of travel at forty miles per hour. And then, at once the engine quit, leaving us coasting to a slow stop, a hush falling around us. 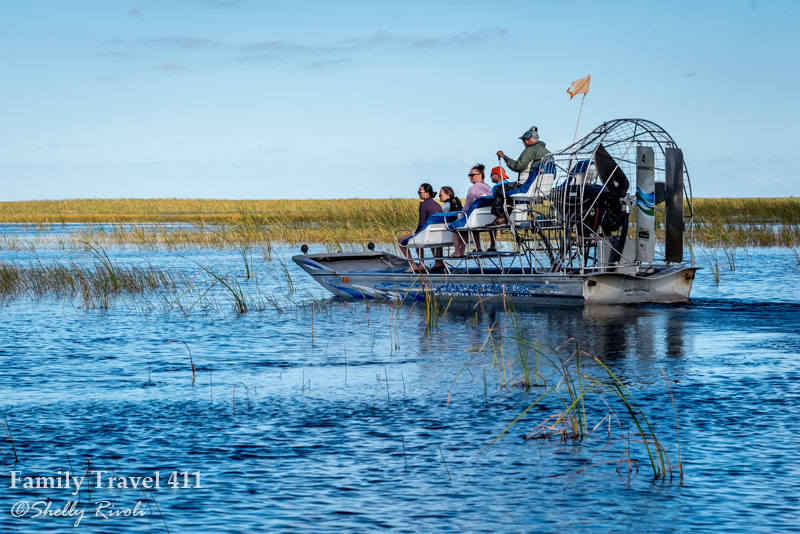 Patches of sky shone between patches of grass as we smoothed over the surface in our flat-bottom boat. Small birds flitted from the grass around us as we went. It was peaceful, serene, and to be honest–not at all how I’d imagined an airboat ride would be.

The water beneath us, Captain Debra explained, was much higher than normal for this area. Just two months after Hurricane Irma, which sent three to ten feet of salt water inland and added significant freshwater from the rains, only the tops of the sawgrass were visible above the surface.

The sawgrass, which can grow up to nine or ten feet tall in some parts of the Everglades, is generally three to five feet tall in this area. 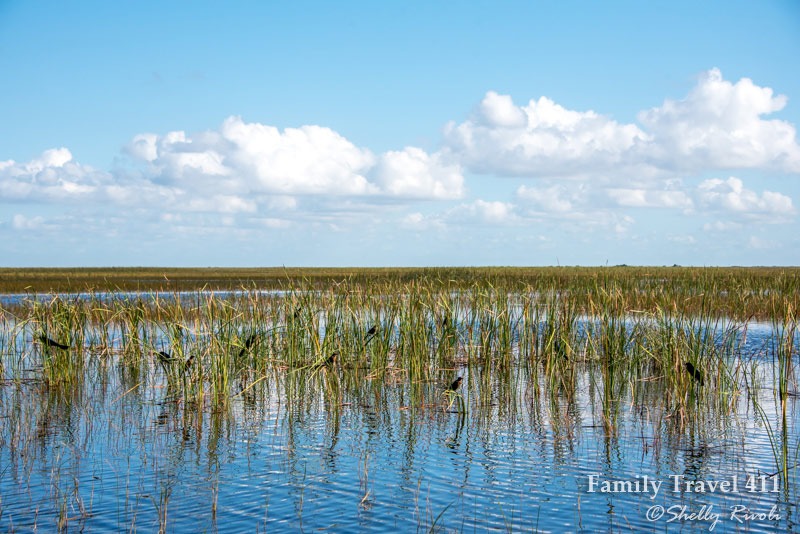 The “River of Grass” itself extends 60 miles wide and flows very slowly for 100 miles from Lake Okeechobe through Central Florida down to where it empties into Florida Bay. Classified as “sawgrass prairie,” this heart of the Everglades is flooded by water of varying depths for at least nine months each year.

But tropical storms in the spring and summer of 2017 had already inundated the area with extra water, causing residential flooding and environmental concern well before Hurricane Irma arrived. While the extra water certainly caused problems inland, it was also heating up in the Florida sun while making its slow journey south. 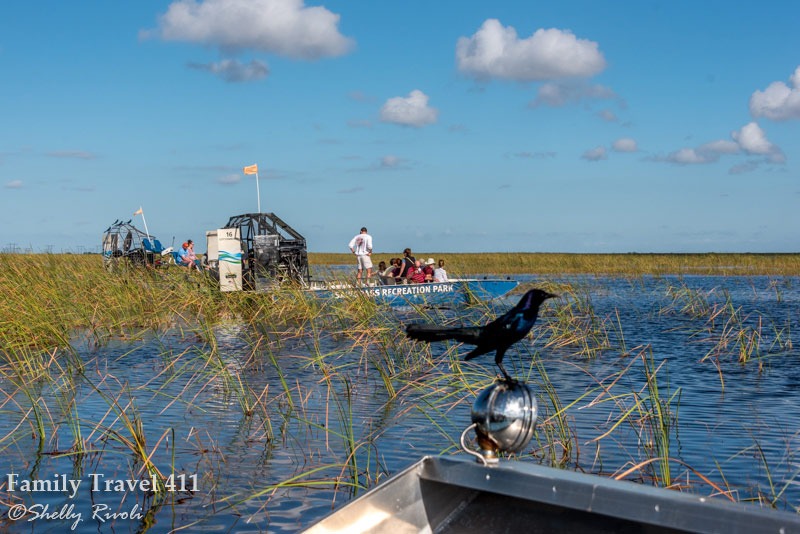 I had to ask, “Is it a problem for the alligators to have the water so much higher than usual?”

Captain Debra explained that it’s not so much a problem for the alligators themselves, but if the waters had risen like this during the nesting season, it would have certainly spelled trouble for the next generation. Female alligators nest in the higher, denser vegetation where their eggs can remain dry. If the eggs get covered by water, they are no longer viable.

But with the unseasonably warm Everglades winters of the past few years, the alligators had started their nesting season earlier than usual–before the unexpected spring and summer storms raised the water levels.

While they lucked out the last time around, it remains to be seen how the next round of courtship, mating, nesting (usually beginning in April), and weather will play out for the large reptiles. 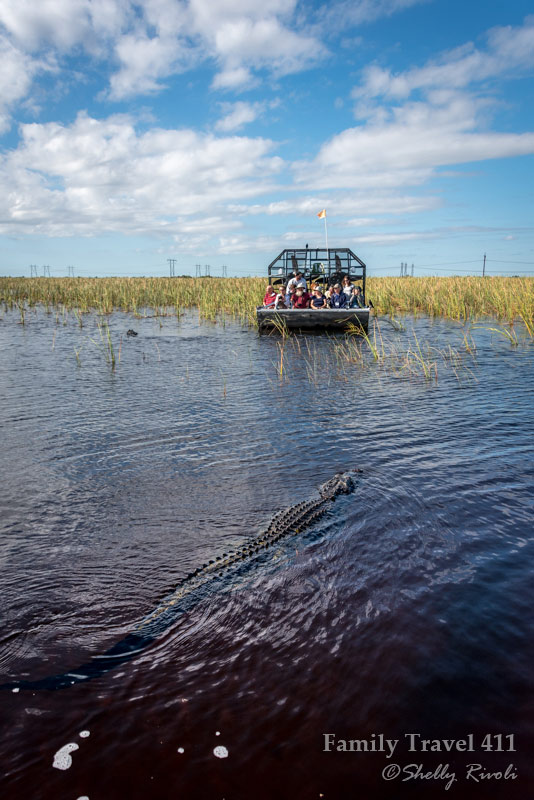 Once we spotted our first American Alligators, they quickly came gliding in toward us–apparently just as curious about us as we were about them. Thankfully, they expressed no interest in joining  us for the ride. 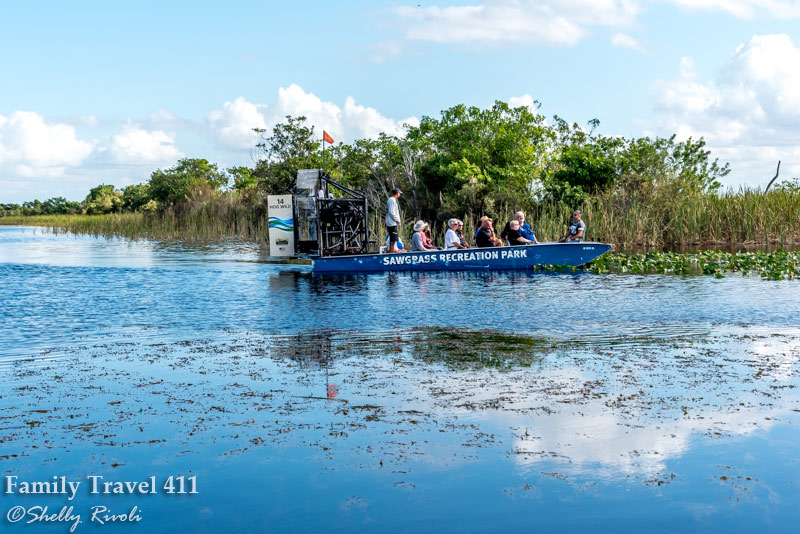 Unlike the neighboring Big Cypress National Preserve, where numerous species coexist including panthers, squirrels, bears, and deer among others; the sawgrass marshes of the Everglades are home almost exclusively to alligators–and birds.

The diving double-crested cormorants, wading white ibis, and very social vultures are normally common sights around Sawgrass Recreation Park. But at the time of my visit, just two months after Irma had swept over the state, that wasn’t the case at all.

“It’s eerie not seeing these daily birds; they’re normally sitting up in the trees together or flying together.” Captain Debra told us how a family colony of nearly three dozen cormorants they’d see each day near the docks had only ten return after the hurricane. “And I have not seen one ibis back at the park … not one has come back.”

Also dwindling post-hurricane Irma were the numbers of dragon flies, “We should still have millions out here,” she explained, “they’re nature’s mosquito control.”

Still, the beauty of the park astonished me. That the forces of nature I’d watched on the news could have let loose such wrath just weeks before my arrival seemed inconceivable as I looked at the bright puffs of clouds and blue sky on the slow-moving mirror of water beside us.

We ventured on toward an area of higher ground, an island-like clump of dense vegetation topped with shrubs and small trees. Captain Debra explained this was where we would normally see bigger birds and lots of them. We drifted slowly by searching for signs of returning raptors and water birds.

And that’s when we saw it: the first osprey returned to this portion of the park since the hurricane. 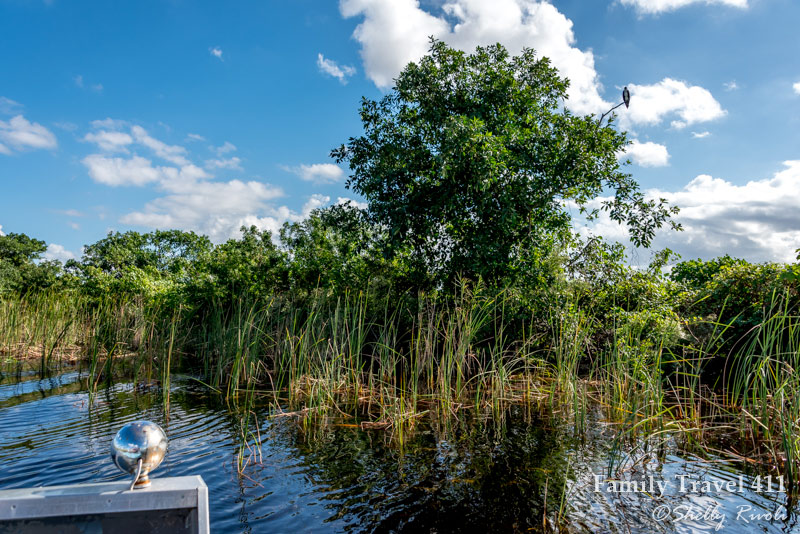 We sat in awe for a moment, silent but for the clicking of a half dozen cameras. I could only imagine what this creature had witnessed over the past two months, the story of its journey to wherever it had fled for its life. And, sitting there at the end of a broken tree branch, the story of its present in the ever-changing Everglades. 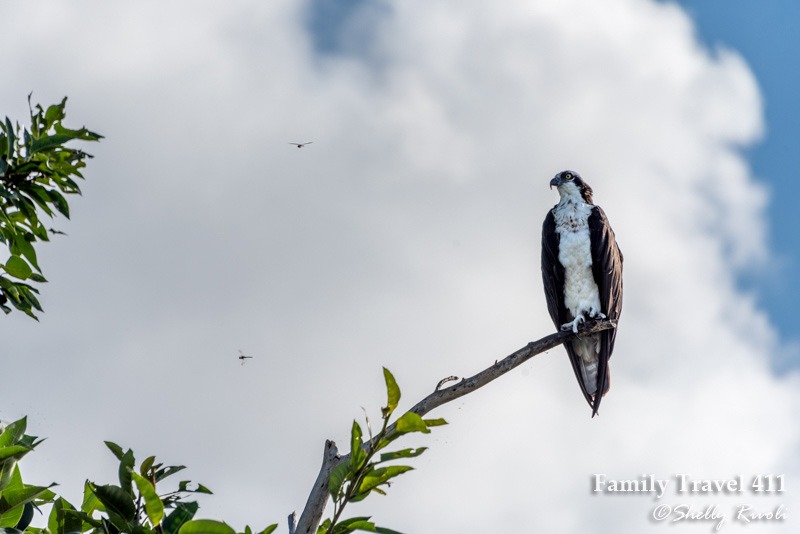 When I spoke with Captain Debra this week, she told me that some ibis had finally returned to the park, but oddly enough they didn’t appear until late December. The double-crested cormorants and vultures still had not returned in their original numbers. Unfortunately, the winter brought with it even more rain, and the water level remains close to what I saw during my visit.

The good news, she reported, was that they had finally seen much-needed cold winter weather for the first time in two years, including five days of temperatures in the 40s (Fahrenheit). While shorts and sandals were perfectly adequate for work over the recent overly warm winters, she said she’s more than happy to need a jacket and long pants on the airboat these days. “I’m losing my tan for the first time in years,” she laughed and then added, “but that’s a good thing.”

Sawgrass Recreation Park is about 30 minutes east of Fort Lauderdale on US Highway 27. The park is open daily except for Thanksgiving and Christmas, and in times of inclement weather (call if uncertain). The most popular tour here is the 30-minute airboat ride, which includes access to the exhibits area with daily shows and special guests visiting from a local wildlife rescue group.

For an even wilder ride, consider joining one of their Gator Nights trips departing Wednesday and Saturday nights, or schedule your family’s own private Red-Eye evening tour customized for your group for one hour or longer. Child discounts are given for kids 4 to 12 years, and children 3 and younger are free. Details and online discounts available at www.evergladestours.com. For more of my recommended Florida family activities, click here.

Thanks to Greater Fort Lauderdale and Sawgrass Recreation Park for letting me tag along on this ride. 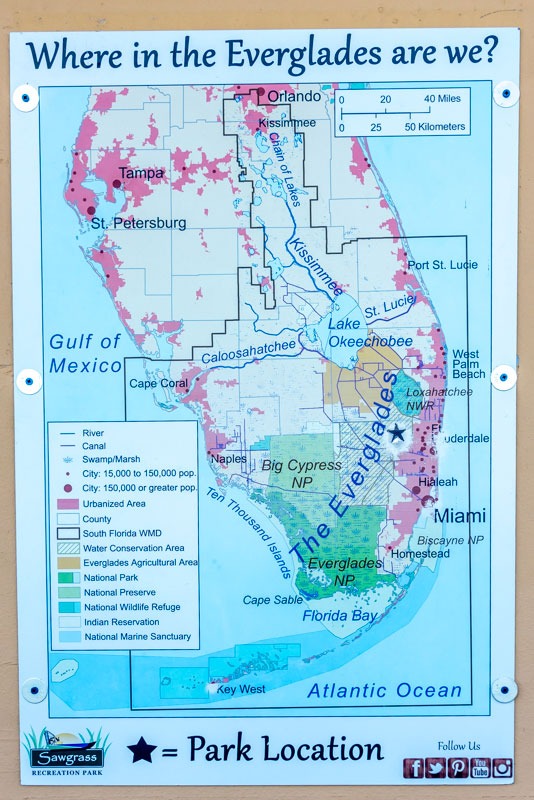 Pinnable for Your Trip Planning: 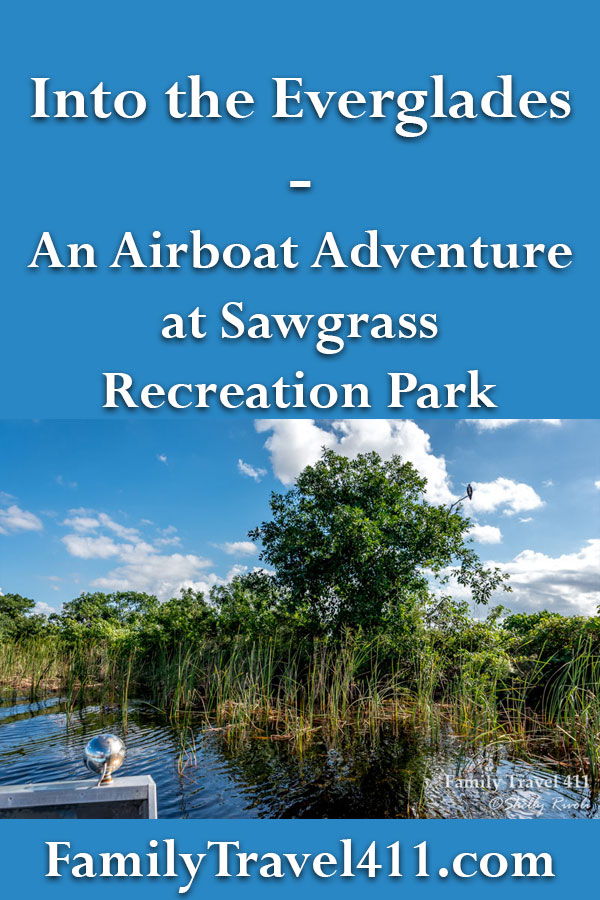 Shelly Rivoli is the award-winning author behind the Travels with Baby guidebooks and Travels with Baby website and blog, and is the founding editor of Family Travel 411. When she isn't traveling with her husband and three children, she hangs her hat in the San Francisco Bay Area. Follow her on Twitter: @travelswithbaby and Facebook: Shelly Rivoli.

Ten Things to Know Before Taking Kids to a Broadway Show

Review of the S-Zone DSLR camera insert for...

Whale-Watched on the Sea of Cortez

The Best Travel Purse for a DSLR Camera...