DISTRICT OF COLUMBIA, Washington D.C. with Kids – Stand before the white-domed U.S. Capitol and you will hear the squeals of school children in their bright matching T-shirts and feel the swoosh of politicians rushing to make their next appointment. And then you are off to yours–perhaps it’s the Air and Space Museum to see the Wright Brothers’ original plane, or the Natural History Museum’s to see a real T-Rex skull. And for a quick lesson in American history, contemplate Lincoln’s marble-etched words at the Lincoln Memorial.

While the city’s energy is exciting, it can also be exhausting for the family visiting Washington D.C. with kids–and be warned, these happen to be the D.C.’s top tourist spots and they will be crowded. For a richer (and calmer) experience, this local mom recommends spending a day touring DC’s must-sees while also leaving plenty of time for exploring some lesser-known and less-crowded attractions.

Here are recommendations for some family fun that will get you away from the crowds, plus a family-friendly hotel that will place you smack in the middle of the action, and a food destination that will please the whole family (map included below). 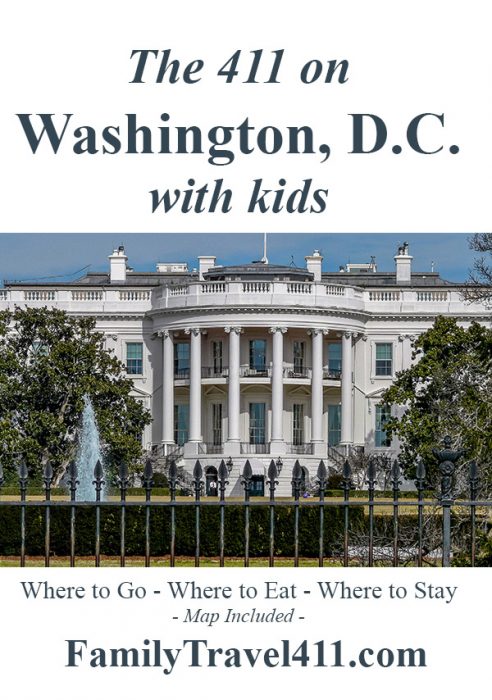 Activity 1: Stroll Through Indoor and Outdoor Gardens at the U.S. Botanic Gardens 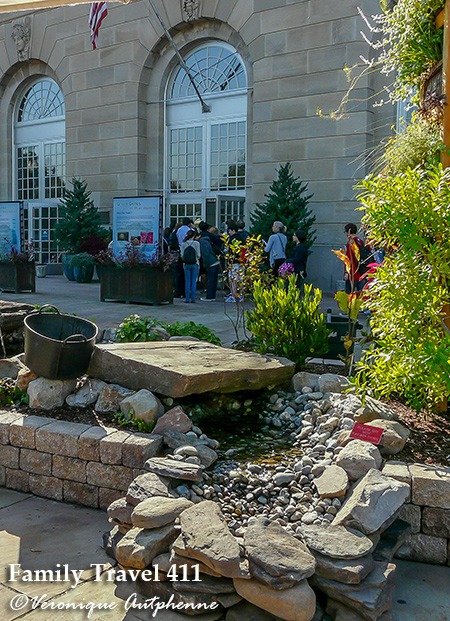 Get back to nature in the middle of a busy day on the mall.

Located just below the Capitol at the far end of the National Mall, the U.S. Botanic Gardens are reminiscent of a Victorian conservatory, with atriums, fountains, and hidden nooks. It’s a wonderful place to stroll around and to get some much needed respite during a busy day on the National Mall.

The central jungle is in a 93 foot dome and depicts and abandoned plantation in a rain forest. Also check out the other sections which house collections of plants from tropical, subtropical, and arid regions, showcasing orchids, ferns, cacti and medicinal plants in a natural setting. Beware of sudden changes in temperature since each section has its own microclimate.

The outdoor National Garden features a Regional Garden of mid-atlantic flora; a Rose Garden devoted to America’s national flower; a Butterfly Garden; and the First Ladies’ Water Garden, whose design is inspired by a colonial-era quilt. Also make time to stroll over to Bartholdi Park, a favorite “secret” garden of Washingtonians located across Independence Avenue from the Conservatory. 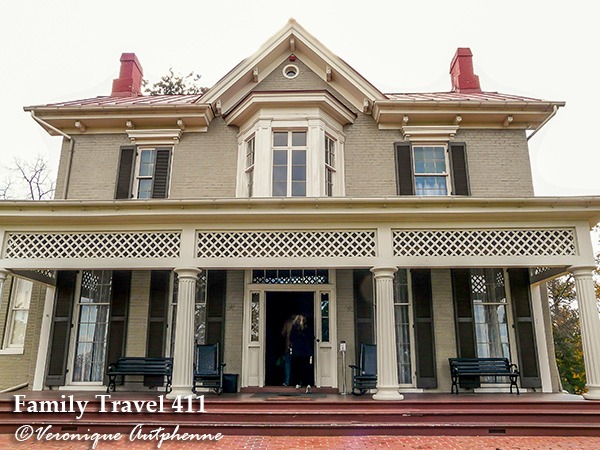 Inspiration and outstanding views at the Frederick Douglass Museum.

In a city full of history, the Frederick Douglass National Historic Site stands out both because of its significance in civil rights history and for the unbelievable views of the city. Frederick Douglass’ thirst for freedom and belief in the power of education for the betterment of individuals and societies have made him an iconic figure in American history.  Born into slavery in 1818, he was abandoned by his family at an early age.  After years of brutal treatment as a slave, he traveled to Massachusetts disguised as a sailor to achieve his freedom in 1838.  Having gained his freedom, he devoted his life to the struggle for abolition and, later, women’s rights.

The museum has a visitor’s center where you can watch a film reenacting Douglass’ life. You will then climb the eighty steps to the top of Cedar Hill, to the beautiful mansion Douglass bought in 1878 and lived in until his death in 1895. The free guided tour is loaded with anecdotes about Douglass’ private and political life.

Stroll through the garden and you’ll find Douglass’ Growlery, a small wooden cabin he had built to get away from the chaos of the household. And no, they don’t let you retreat in there if the kids are acting up.

Note: The site is not stroller friendly and this visit is definitely better for older children.

Activity 3: Visit Your Favorite Stars and Historical Figures at the National Portrait Gallery 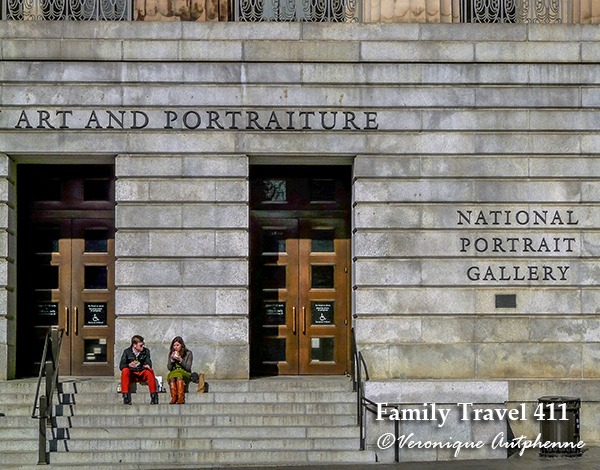 The National Portrait Gallery features portraits of notable Americans. And it’s one of the rare art museums with wide enough appeal to please history buffs and pop culture vultures alike. Some highlights here include Gilbert Stuart’s 1796 standing portrait of George Washington, as well as the artist’s unfinished portraits of George and Martha Washington, which were used as studies for later reproductions.  Fun fact: it is this portrait of George whose mirror image was used for the engraving that appears on the one-dollar bill.

Be sure to check the website for the day’s family activities and pick up a “Portrait Discovery Kit” at the education center. Designed for children aged four to 14, each kit includes a guide, a scavenger hunt, and an activity.

Tip: The museum’s inner courtyard café is large and airy and a great place to grab some ice cream and coffee while little ones stretch their legs.

Activity 4: Explore Your Inner Architect at the National Building Museum 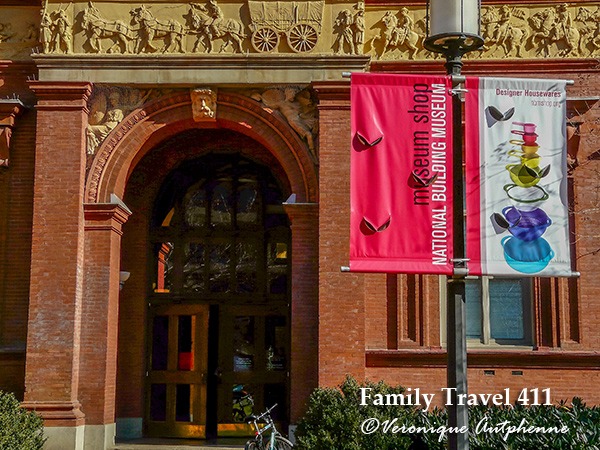 Hands-on fun awaits the kids at the National Building Museum.

The National Building Museum is a favorite local spot on cold winter days and steamy August ones. A favorite among the younger set, the Building Zon is a building and discovery space where children age two to six can don a hard hat, grab a hammer, and work on an architectural creation of their own.

Older children with an interest in architecture and design will enjoy the two permanent exhibits. Cityscapes Revealed focuses on urban American architecture from the 19th century to the mid 20th century. And Washington: Symbol and City looks at DC’s ongoing identity struggle between serving as the seat of government and as a national symbol. In addition, the museum has several non-permanent exhibits and a different large-scale installation every summer.

Cultural Note: The first Inaugural Ball was held at the National Building Museum in 1885 by Grover Cleveland. The tradition continues to this day. 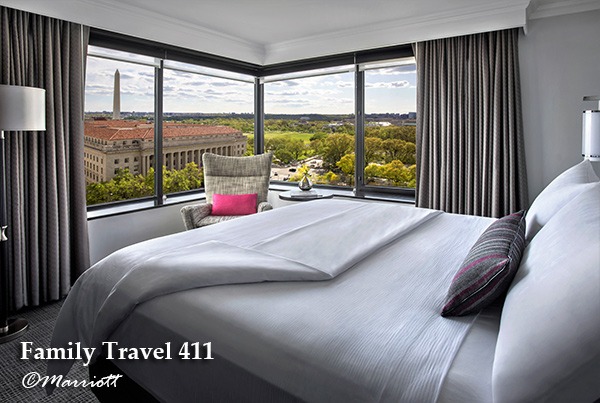 When you’re traveling with the family, there’s nothing like taking a break half-way through your sightseeing day for a swim or a little shut-eye. JW Marriott Washington, D.C.,  is perfectly situated to let you do just that. The luxury hotel features an indoor pool and is located within easy walking distance of the White House and the National Mall. Make sure you ask for a room with a view!

The Marriott has two on site restaurants but you won’t need them—a ten-minute walk will take you to Penn Quarter, which offers plenty of options, from sandwiches to celebrity-chef haunts. 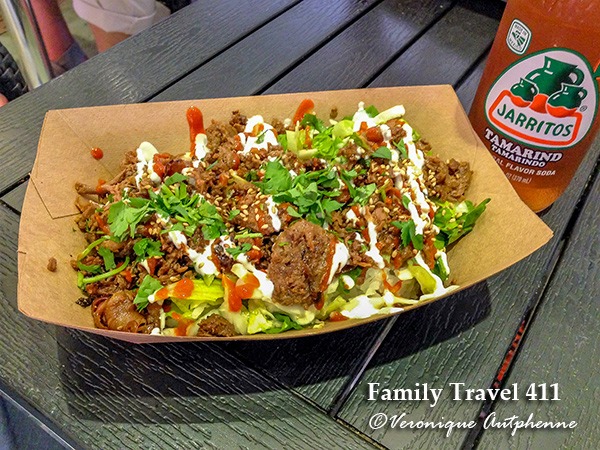 A world’s worth of food options abound at Union Market in D.C.

Can’t agree on what to eat? No worries. Just head over to Union Market and choose from over forty local food vendors and three pop-up shops. Some examples of what you’ll find include fresh Mediteranean mezze, Korean-Mexican fusion bowls (pictured), Indian vegetarian dosa, meat pies, French pastries, and one great cup of coffee. That should have you all covered.

Great Travel Games and Toys for Tots through Teens