CUBA, Havana with Kids – For many travelers, Havana feels more like a movie set than it does a living, breathing city. Everyday folk go about their business in 1950s Chevrolets, Buicks, and Fords and you half expect a director to pop up from behind a camera at any given moment to shout, “Cut!”

Its lively and vibrant backdrop of crumbling colonial architecture is also a reminder of days gone by, when the city served as a transportation hub for Spain’s New World gold and riches. Today, Cuba has been propelled into the tourism spotlight thanks to recent thaws in its relations with the USA. Whilst this has made it easier for some Americans to travel to this fascinating country, for the majority it is still not that simple. This page from the USA Embassy in Havana has more information on current requirements. 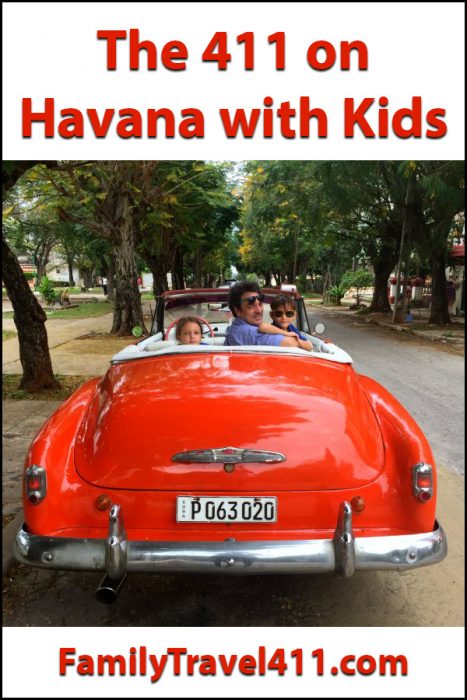 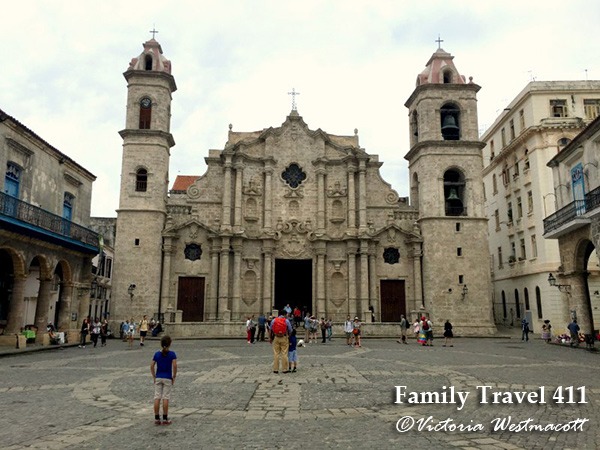 Old Havana is a UNESCO protected district best explored on foot and it’s easy to fill the days simply wandering around, taking in the colourful streetscapes and numerous street performances.

There are four main plazas worth visiting, each with its own distinct character. La Plaza de la Catedral is home to the baroque Catedral de San Cristobal de la Habana, named after Saint Christopher (the patron saint of Havana) rather than the explorer. Climb to the top of the clock tower for a wonderful view of the plaza below.

The other three plazas are, Plaza de Armas, Plaza Vieja and Plaza de San Francisco de Asis, and it’s easy to walk between all four. The Plaza Vieja is particularly popular with families at dusk, when children gather to play. Also in this square is a rooftop Camera Obscura, an optical device that takes you on an aerial tour of Havana – definitely worth a visit with kids.

Take a quick virtual stroll around old Havana with kids with this video:

Activity 2: Go Cruising in a Chevrolet 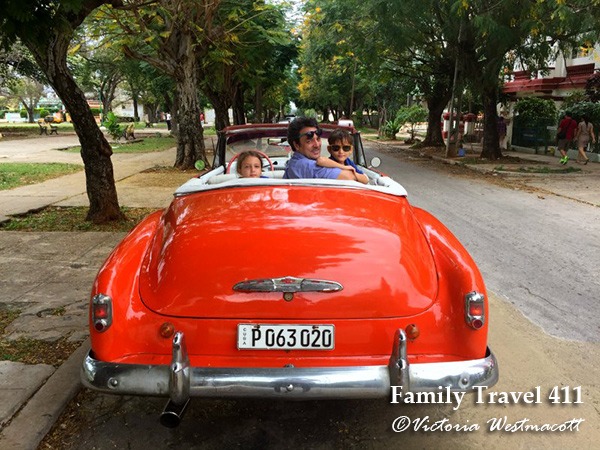 Explore Havana with kids in a classic car!

This is one of those tourist activities that you simply have to do, for nothing quite beats cruising Havana’s streets in a classic car. You can book your “cruise” through a hotel or an agent, or you can simply find a car on the streets. They generally line up near the main tourist sights. Pick which one you like best!

Most classic car rides head out of Old Havana (into the districts of Vedado and Central Havana) and follow a similar route; along the Malecón, Havana’s wide, coastal road, past the Hotel Nacional (where the largest ever Mafia summit was once held) and towards John Lennon Park. Ask your driver to finish the tour at Paladar La Guarida, our favourite restaurant in Havana (see below!)

Classic Car tours cost around $30 per car (including driver) per hour. Watch this video for a quick drive around Havana in a 1951 Chevy: 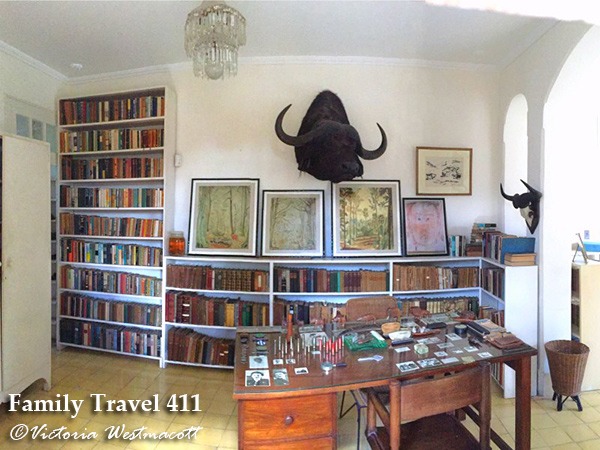 Ten miles southeast of Havana is the small town of San Francisco de Paula. There you’ll find ‘Finca Vigia’ (the lookout farm), the former home of American novelist, short story writer, and journalist, Ernest Hemingway. His home remains just as he left it and is a very interesting place to explore.

Hemingway lived here from 1939-1960 during which time he wrote several books, including The Old Man and the Sea. The house is full of books and photographs as well as paintings, magazines and hunting trophies.

Sadly, you can’t wander around the rooms themselves, but you can still get a feel for how he lived. Particularly interesting for kids is the bathroom, where Hemingway obsessively scribbled his weight on the walls!

Follow this link for more information on visiting the Cuban Home of Ernest Hemingway, and get a preview from our visit in this video: 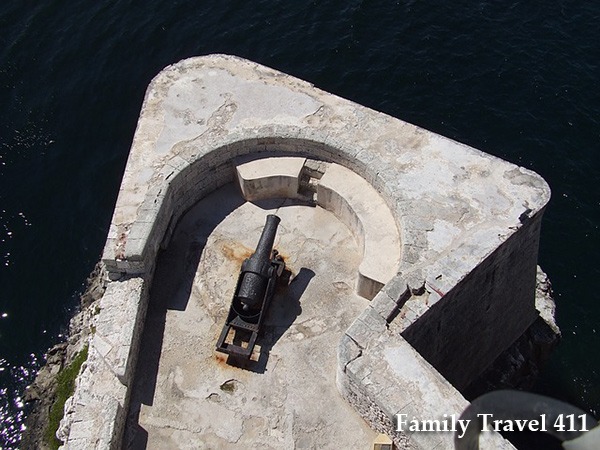 Head to the fortress to watch the reenactment and cannon shot.

Every night a cannon fires from La Cabaña Fort, on the other side of the harbor. You have to drive through the tunnel to get there. During the colonial era, the sound of the cannon marked the end of the day when the city gates would close for the night.

These days the gates remain open. Instead you can enjoy a reenactment of the 18th century ceremony prior to the cannon being fired at 9pm. It’s best to get here around 8pm in order to secure a good viewing spot.

1 Great Place to Stay in Havana with Kids 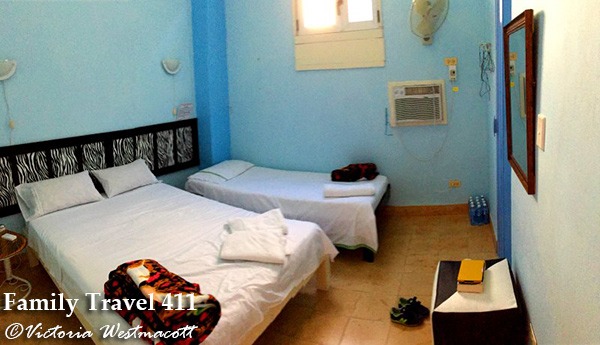 Casas particulares are a great option when visiting Havana with kids.

In response to the post-Soviet economic crisis in the 90s, Cuba’s Communist government permitted families to rent out rooms in their homes as privately run B&B businesses. These homes (Casas Particulares) are a lot cheaper than hotels and are often better options for families.

Many casa particulares have rooms with two double beds and some are rented out in their entirety. Although the majority are backpacker basic, they do offer tourists the opportunity of spending some time with a local family, an experience a hotel cannot provide.

Rather than recommending just one of them (which is hard as I don’t have a favourite) I would suggest browsing Cuba Junky’s directory of casas particulares instead. Downloaded as an app, it’s an excellent guide. Follow this link for more details on booking a Casa Particular with kids. 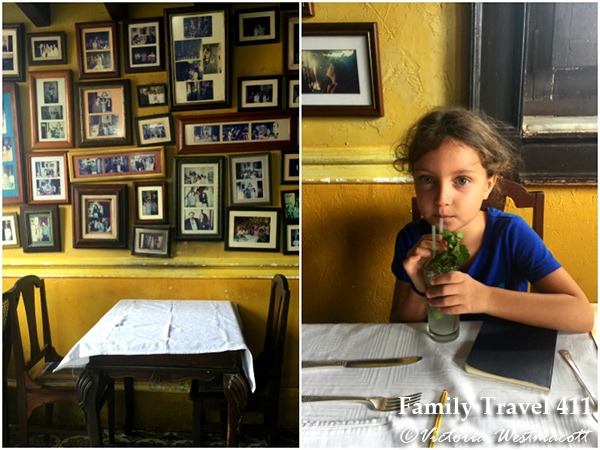 Raul Castro’s economic reform programme also permitted people to turn their homes into private restaurants (paladares). Hidden behind a crumbling exterior in Old Havana is one of Cuba’s most popular, Paladar La Guarida. It was made famous by the Oscar-nominated movie Fresca y Chocolate. Its bright yellow walls are covered with photos from the film as well as celebrities who have dined here.

The food is here is excellent. I enjoyed Bonito glaseado con caña de azúcar (tuna on a sugar cane stick), and the children shared some corvina. All washed down with a mojito (including non-alcoholic versions for the kids).

Keep in mind that kid-friendly amenities such as high chairs or kids menus are not common in Cuba. Another point to bear in mind is that the majority of private restaurants mostly cater to tourists and expats. As such, the restaurant scene is still relatively limited. Given today’s booming tourist industry, reservations are essential in places like La Guarida.

For more help planning your trip to Havana or elsewhere in Cuba, click here for Globetotting’s full, in-depth guide to Cuba With Kids.

If Cats Could Type in Key West: A visit to the Hemingway Home Museum

Victoria Westmacott writes at farflunglands.com, a family travel blog dedicated to experiential learning and transformational experiences. Victoria likes to look beyond the traditional family-friendly resort, theme park and 'fly-and-flop' beach holiday to far-flung lands where kids can be safely removed from their comfort zones and immersed in cultures significantly different from their own. This, she believes, is how children (and adults!) learn best. Together with her husband and two children, Victoria has lived in USA, Vietnam, India and Panama. She is currently based in Quito, Ecuador. Follow her on Twitter @farflunglands, Facebook @farflunglands and Instagram @farflunglands

Thank you for sharing my recommendations on 411!

I loved Havana so much! I stayed inone of the Casas Particulares when I went, and loved getting to know a local family!

I so want to do a classic car tour! Really looks like fun and would be great to tour with a local guide all in one fell swoop!

Oooh, I can’t wait to go with my kids. Thanks for the great tips.