GERMANY, Cologne with Kids – Want to get your kids excited about Gothic architecture? Then hop on a train to Cologne’s main station and step outside. Once outside they’ll do what everyone who walks out of the train station does– stare up at the 516’ Cologne Cathedral right next door.

Let the Cathedral draw them into the city. Farther into Cologne they’ll discover a city that feels new and trendy, yet dates back to the Roman Empire. They’ll find a city celebrating its German roots and global connections with world-renowned events, museums, and cuisine.

For these recommendations, I’m concentrating on 4 activities, 1 great hotel, and 1 great restaurant that connect both Cologne’s past to its present, and its German heritage to its international flair. And they each prove that visiting Cologne with kids is a great idea. Let’s go!

Activity 1: Tour a Building that Took over 600 Years to Build 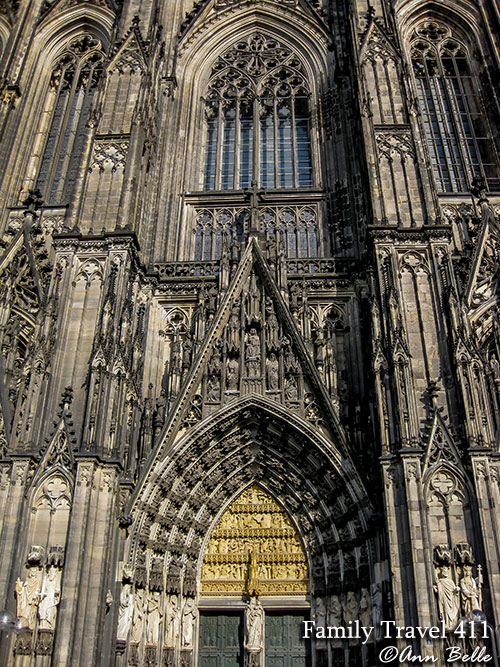 With a Unesco World Heritage Site looming just outside the station, Cologne is quick to impress visitors.

Construction on the Cologne Cathedral started in the 13th century. It wasn’t completed until 1880. Today it is the city’s icon, a UNESCO World Heritage Site, and Germany’s most visited tourist destination. With an average 20,000 visitors a day, it seems those with kids would want to avoid it. Don’t. Unless there’s a special event in the city, it rarely feels overcrowded.

For a few euros you can pick up an English language pamphlet and do a self-guided tour of the interior. A family ticket will save money for those interested in seeing the treasure chamber. The fearless can climb the steps to the observation tower to see the city from above.  www.koelner-dom.de

Tip: Additional information can be found next door at the Dom Forum. They offer cathedral tours in English and for children throughout the day.

Activity 2: Get Inspired to Become a Patron of the Arts at Museum Ludwig 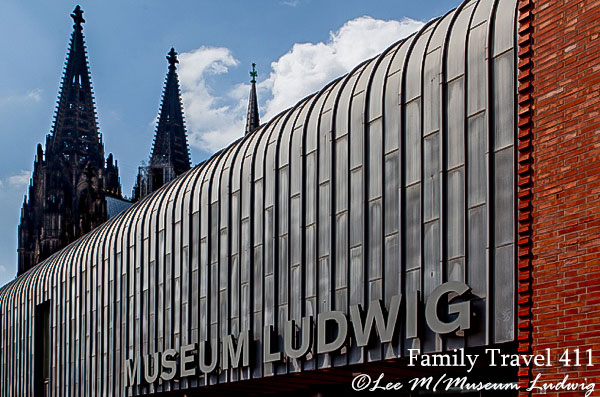 Museum Ludwig has something to inspire everyone, including the littlest kids.

Immediately next to the cathedral is Museum Ludwig. In 1946 a local lawyer donated his expressionist art collection to the city of Cologne. That same year, Peter Ludwig, a young student at the University of Cologne, saw the exhibit and it inspired him. Fifty years later he gifted his own collection of Picasso’s work to the city.

That art, along with others donated throughout the years, is housed at Museum Ludwig. Today it holds the third largest Picasso collection in the world, the biggest American pop art collection outside of the U.S., and more.

Best of all, though, is that this is a child-friendly museum. I can’t help but think they’re specifically molding the next generation of art collectors (and donors). Though most of their special children’s programming is in German, you can book an English language option in advance. Or, you can borrow the “family suitcase” for your visit. The suitcase includes toys and activities aimed at kids 2 and older to help them learn more about color, form, and material.   www.museum-ludwig.de

Tip: New in 2015 – the Art Lab. This space includes several art stations for kids to keep art fun. Exhibitions within Art Lab will change frequently, often coinciding with art currently being displayed in the main area. 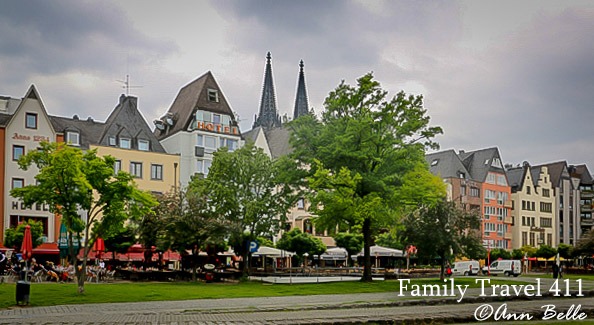 For the best views of Cologne, hop a Rhine River cruise from the Promenade.

Enjoy the walkable area next to the Rhine River. It starts at the train station’s Hohenzollern Bridge and ends at the beginning of the Rhine Harbor. This is an easy place to wander, sit at an outdoor cafe and watch the boats, go for a short boat tour, or just play in the grass.

Buildings look old, but they’re not. Around 95% of the buildings were destroyed during World War II and rebuilt in the past 60 years. Can you guess which are which? If you’d like to explore it even more take a 1-hour cruise on the Rhine River or get a Hop On/Hop Off Bus/Ship pass.

(Hot) Tip: Cool down with ice cream while you walk around. Locals and tourists alike take advantage of the many shops located in the city.

Activity 4: Choose Your Own Adventure with the Bimmelbahn 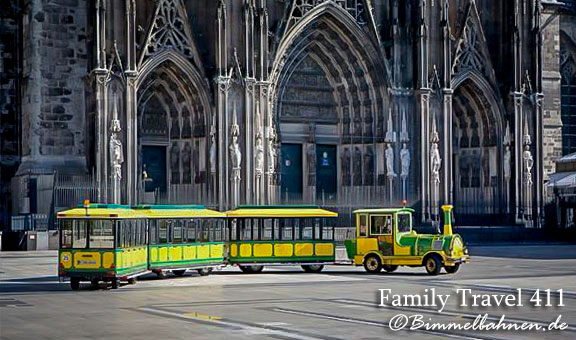 Choose your own adventure when you catch the Bimmelbahn in Cologne.

Hop on the green mini train and whisk the family away to a local site that best suites your personal interests, all while seeing more of the city. Starting at the Cologne Cathedral this train offers two options.

Chocolate or sports lovers will take the southern route to the Rhine Harbor, then pick from either the Imhoff-Schokoladenmuseum–a Lindt-sponsored museum of all things chocolate–or the Deutsches Sport & Olympia Museum where they can not just learn but try different sports.

The second route heads north, where the final destination is the Cologne Zoo. But those who want to get some energy out should stop at the cable car and cross the Rhine River to the Rhine Park.   www.bimmelbahnen.de

Tip: The Bimmelbahn run is seasonal depending on the route. However, during the Christmas Market season there is an option to take riders to four of the city’s most popular markets. 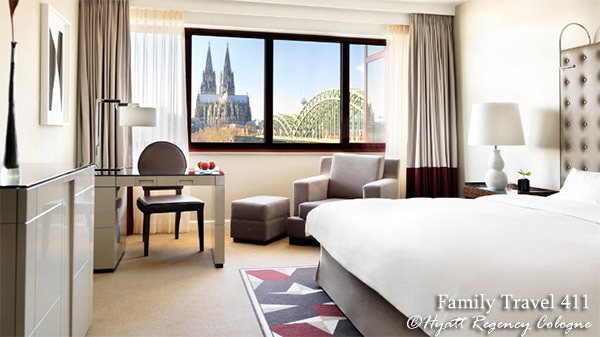 A Rhine View Room at the Hyatt Regency Cologne, Germany.

Like most European cities, hotels can be an issue. It’s difficult to find the balance of space, affordability, and location. The family-friendly Hyatt Regency Cologne strikes that balance. It’s a luxury hotel located directly across from the Cologne Cathedral (and very convenient if you arrive by train!).

Because of the distance, the price is lower than a comparable one in the city-center. But, it’s hard to feel separated from the action with views of the cathedral, promenade, and river from your hotel room.    http://cologne.regency.hyatt.com 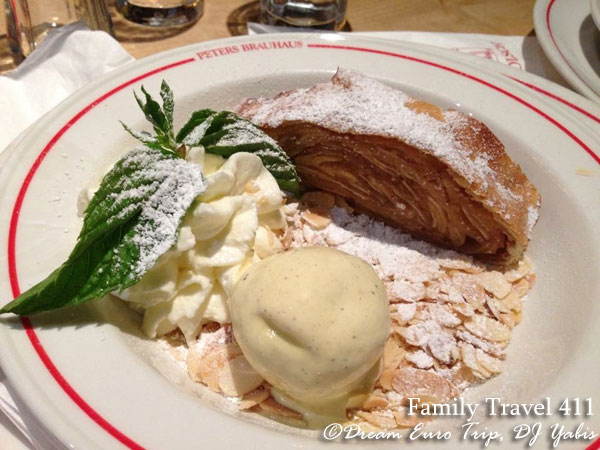 Peters Brauhaus is a great stop when visiting Cologne with kids (or without!).

Visiting a brewery with kids in Germany is perfectly fine. If you’re in Cologne, this is where you want to do it. Their menu offers popular German dishes as well as local specialties. The adults in the group can drink the local Kölsch beer and kiddies can sip on Apfelschörle, an apple juice and mineral water mix. Save room for dessert!   www.peters-brauhaus.de

Tip: Because of its location in the Altstadt, Peters Brauhaus can get busy during popular hours. Reservations can be made in advance (Tel. 0221 – 257 39 50) or visit during non-peak hours.

Travel with Teens: Tips for Getting & Renewing U.S. Passports