MASSACHUSETTS, Cape Cod with Kids – Cape Cod rises like a strong, flexed arm from the southern end of Massachusetts into the Atlantic ocean. Boasting hundreds of miles of scenic seashore, Cape Cod is nearly synonymous with “family vacation,” and of the 3+ million visitors that flock to the Cape each summer, most are families coming to spend time together at the beach.

As you might guess, the days of sun, surf, and seafood can also come with traffic, full beach parking lots, and long waits at attractions and eateries. Happily, with a little advanced planning, it’s possible to enjoy Cape Cod with kids without encountering high season traffic and congestion. Here’s what I recommend. 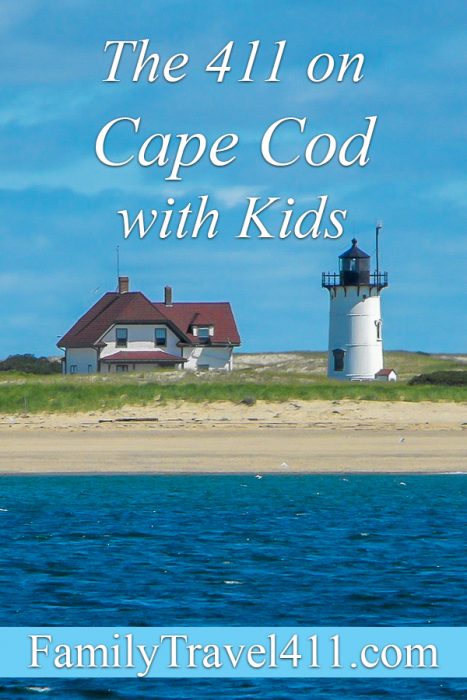 Activity 1: Dive in to a Kettle Pond 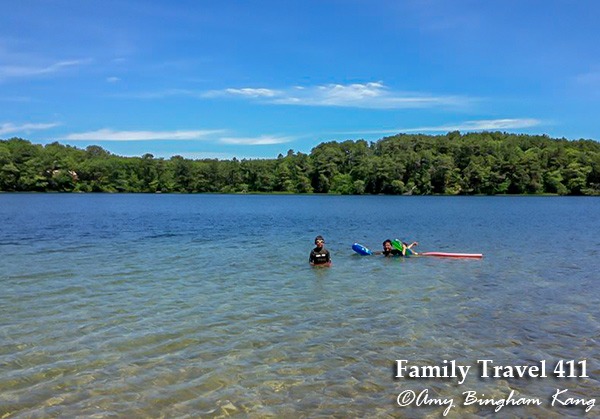 Slough Pond, one of the freshwater “kettle ponds” on Cape Cod.

Need a break from salt water, sand and crowded beaches? Check out the Cape’s little-known freshwater swimming holes commonly known as kettle ponds. Kettle ponds are holes in the ground formed by glaciers that then filled with fresh water. They are calm, quiet and especially perfect for tiny swimmers.

We love Nickerson State Park in Brewster. A daily entrance fee of $8 offers access to three idyllic kettle ponds. Other ponds are nestled so deeply in the woods that they require Pokemon-Go style sleuthing. One of our favorites is Slough Pond in Truro, which is located within the Cape Cod National Seashore and so does not require a town sticker. 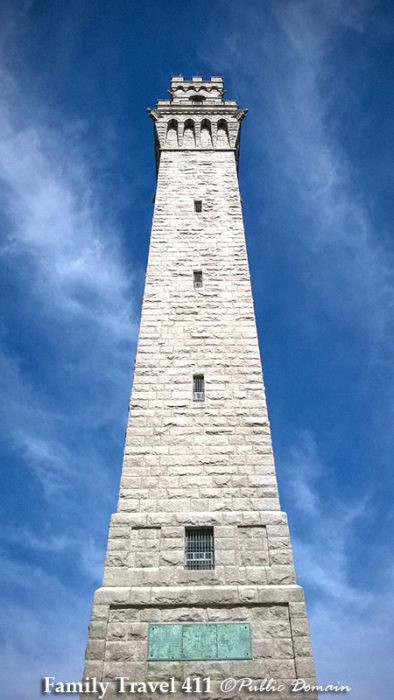 Long before Cape Cod was a vacation mecca, it was known as the first place the Mayflower landed in North America. The Pilgrim Monument in Provincetown offers a glimpse into layers of American History, detailing the struggles the pilgrims faced as winter approached in 1620, as well as Teddy Roosevelt’s determination to get the monument built in the early 20th century. For students old enough to absorb knowledge about our nation’s beginnings, Pilgrim Monument is a must-see.

The monument is also a fantastic workout for kids who may have been cooped up in the car on the way to Provincetown: It’s a gentle but steady calorie-burner up 252 feet to the top, where sweeping vistas of the tip of Cape Cod await. 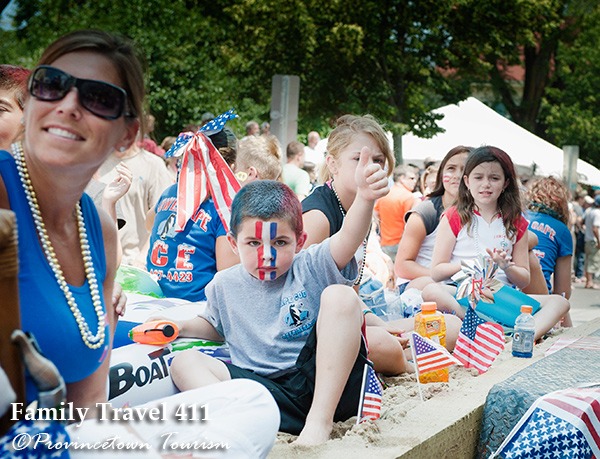 If Cape Cod is a flexed arm, Provincetown is its slender fingertips. P’town’s sensibly-named Commercial Street straddles Cape Cod Bay and offers dozens of well-curated souvenir shops, galleries and eateries. Cars are allowed on Commercial Street, but ice-cream cone eaters, stroller-pushers, window shoppers, and street performers walk directly in the street. Rather than an annoyance, this lends to a party-like feel much of the time.

An LGBT vacation destination for generations, Provincetown maintains broad appeal for people of all backgrounds. On the same shores where the first Europeans landed seeking freedom almost 400 years ago, the freedom to be yourself, whoever you are, is celebrated daily along Commercial Street.

Tip: Provincetown is a party town, so crowds aren’t an issue until after 10am. Arrive early and park once for both Commercial Street and Pilgrim Monument. 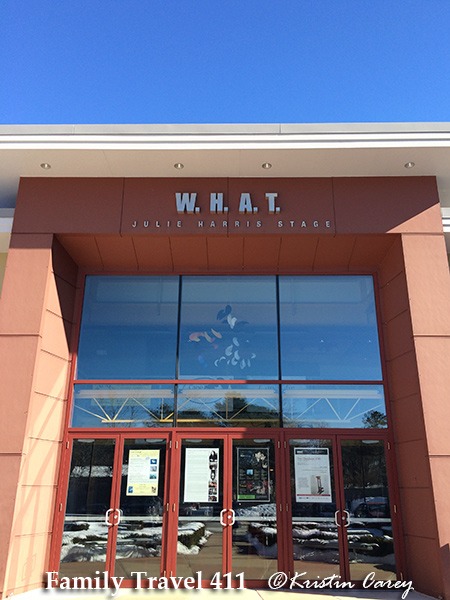 Live children’s theater, indoors or out, makes for a great outing while visiting Cape Cod with kids.

We love visiting local theaters because it offers a window on to off-season Cape Cod. Cape Cod Performers, directors, set builders and choreographers are local, year-round residents who work through the year to create engaging and memorable performances for summer visitors.

The Wellfleet Harbor Actor’s Theater has a dedicated performance space for kids’ shows where young ones are welcome to sit, or even lay down on the floor. Cape Rep. Theater offers kid-friendly shows like “A Year With Frog and Toad” in a peaceful l outdoor amphitheater tucked in the woods. Harwich Junior Theater presents performances and day camps for young thespians. 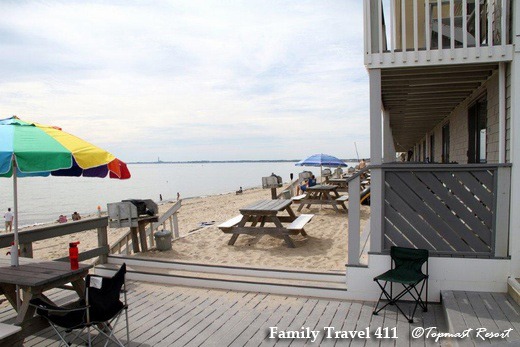 Beachfront bliss for families staying at the Top Mast Resort.

The Top Mast is located directly on Cape Cod Bay, so visitors don’t need a car or a town-issued beach sticker to get their toes in the sand. Accommodations range from a simple hotel room to a large condo that can accommodate multiple families.

Also, the Top Mast features an indoor pool, which is not common on Cape Cod. Weather on the Cape can be unpredictable, so if your vacation includes rain or cool temperatures, you can still put on your suits and swim the day away. 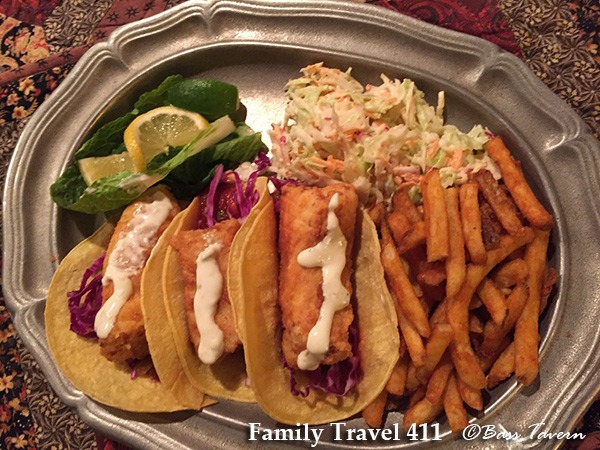 Dining out on Cape Cod during July and August can be a contact sport. In other words, expect long lines. The unpretentious Bass Tavern in Truro (at the Whitman House Restaurant) offers fresh, unpretentious, affordable food and air-conditioning. And unlike so many restaurants on the outer Cape favored by locals, they do take reservations: (508) 487 – 1740.

On Safari in Sonoma: Jeep Tour Adventure at...

My husband and I stayed at topmast s few years ago. Terrific place to stay. Hope we’ll be able to go back again soon. Beautiful area to visit.

Exactly! I’ve always wanted to go, but i”m glad to know what I’ll do if/when we get there! 😀

I have always wanted to visit here not that I see it happening anytime soon as we are in Fort Worth, Texas. But it is OK as we can dream and live through your post.