Ten Things to Know Before Taking Kids to a Broadway Show

NYC, Taking Kids to a Broadway Show – There’s been a lot written about the difference between the traveler and the tourist. The traveler typically heads off in the morning with no plans, filling her days discovering  treasures known only to locals. The tourist, however, has a plan and more or less sticks to the tried and true. While I admire the traveler’s approach, seeing a Broadway show with your family is not the time to flaunt your inner experiential traveler. But it is the time to consult an expert.

As a playwright, proud stage mom, playgoer, and former resident of New York, I have a few tips that will help you make the most of the famed bright lights of Broadway so you can sit back, relax, and enjoy the show.

1. Get tickets ahead of time.

Budget travelers will tell you to go to the TKTS booth on Times Square to look for cheap last-minute tickets. But with kids, the last thing you want is to spend weeks talking up this big outing, only to find that there are no tickets to be had. Also, standing in line may sound good in 70-degree weather but is not so fun in the sweltering summer heat or a winter storm (New York excels at both).

Just because you’re getting your tickets ahead of time does not mean you need to pay full price. Several websites offer discount codes, which can save you tens of dollars. One of the most reliable is Broadway Box. As well, with a free membership to Playbill (yes, the very company that makes those handy programs), you’ll get weekly updates on discounts to shows with updates of what’s going on in the theater world.

Maybe I’m a theater snob. Scratch that. I am definitely a theater snob. But I do feel like if you’re going to pay the money to see a Broadway show, it should be something you wouldn’t be able to see at home. Try to keep abreast of shows that will be touring in your area so you avoid seeing a show you could have seen at home. Les Miserables, for example, toured our home town of Washington, DC, right after a Broadway run. I would have felt a little cheated if we’d traveled to New York for it.

If you’ve been in and around Times Square, you’ll know that navigating your group through the throngs of people can be a challenge. When you’re running late for a show, it can be downright panic-inducing. And once you get to the theater, you’ll have to stand in line and go through a bag check. Late seating is very much frowned upon and sometimes not allowed at all. So make sure you leave yourself plenty of extra time to get there. 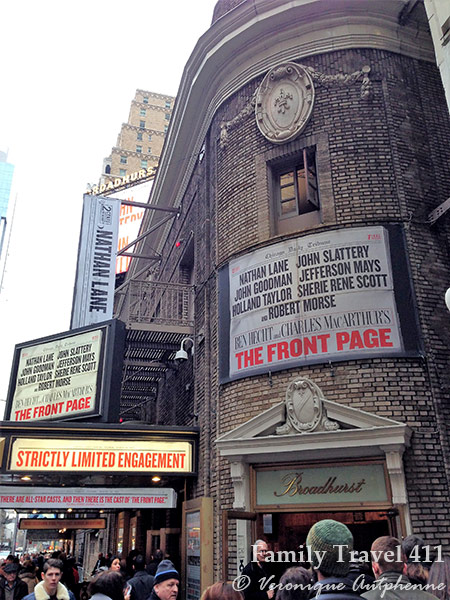 The bustle of Broadway adds excitement to any trip to NYC with kids.

One of the best things about Broadway shows are the theaters themselves. They are grand affairs with gilded ceilings, beautiful chandeliers, and rich, deep colors reminiscent of an earlier era, an era when, apparently, people had enormous bladders. Theater bathrooms are notoriously tiny and not available on every floor. Often, the orchestra restrooms are down a flight of stairs, next to the downstairs bar, or a flight up on the first balcony. And you’ll be amazed at how few stalls there are. So, any time you’re taking kids to a Broadway show, make sure you allow extra time for a pit stop before the show starts and plan to rush over during intermission, especially with little ones.

PSSSST! Don’t miss “The 411 on NYC with Kids” for recommendations and more tips for your family’s visit to New York City!

Five minutes navigating the throngs of people in midtown Manhattan, especially unwieldy during school vacations and holidays, and you’ll realize that wandering around looking for a place to eat with your hungry brood has the potential to turn very ugly very fast. Add to that the fact that you will face a pre-theater and/or post-theater rush in many family-friendly restaurants near the theaters and you’ll be glad you have a plan. Ellen’s Stardust Diner, which is a stone’s throw away from a number of theaters, is excellent and has a Broadway theme, a singing wait staff (!), and is a great choice for families of all ages. Expect to stand in line for this (no reservations accepted), but don’t worry, it moves very fast and worth the wait.

If your travel dates are flexible, try to head to New York during Broadway Week and take advantage of some amazing bargains. Now in its eighth year, Broadway Week happens at the beginning of the year (January 16 to February 4 in 2018) and offers two-for-one tickets to over a dozen Broadway shows. Check www.nycandcompany.org for details and hotel deals.

Before a show officially opens on Broadway, it will spend a few weeks in previews. This means the cast and crew may still be working out a few kinks and the show hasn’t been reviewed yet (it only gets reviewed after it opens). It also means you could be among the first to see a brand new show and, bonus, you will pay a lot less for your ticket (often as low as $30 a ticket). Check www.newyorktheatreguide.com for a listing of upcoming shows and preview dates. 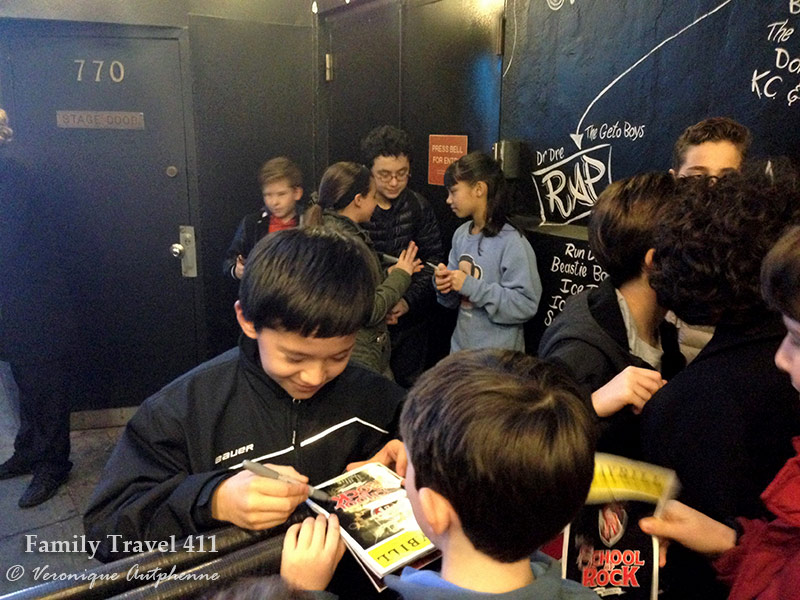 Oh, the thrill of a signed playbill!

What better souvenir from your Broadway outing than a playbill signed by your favorite performer? The best way to score an autograph—and maybe even a photo—is to “hang out” by the stage door waiting for the cast to exit after the show. The stage door is often just off to the side of the main theater entrance and will usually have a sign on it. If it seems to be taking a long time, feel free to ask the stage door security guard to bring your playbill inside for a signature.

If you’re catching a show or two during your stay in New York, you’ll want to stay near the action, preferably without completely breaking the bank. The Kimberly Hotel is near both Rockefeller Center and the theaters, and offers large one-bedroom and two-bedroom suites with kitchenettes and very comfortable sofa beds. Their one-bedroom apartments fit five people quite comfortably. Portable cribs are available free of charge and rollaway beds are an additional $30. Kids will love the enormous fish tank in the hotel lobby. Ask for a room with a balcony and a street view if you want to be part of the action. If you prefer quiet, however, you’ll want to stay in the back.

Don’t miss it! Be sure to read The 411 on NYC with Kids for more recommendations.

The 411 on Quebec City with Kids

Tips for Travel with Kids of Every Temperament

Véronique Autphenne grew up on three different continents and has had a passion for travel ever since she can remember. She has settled in Alexandria, VA, and still travels as often as possible with her husband John and three boys. She started Pax Travel Design to help busy families realize their travel dreams while staying sane in the process. Vero runs the blog, Belgium with Kids, wrote the e-book Brussels with Kids, and co-founded All Over the Map. Follow her on Twitter: @veroautphenne and on Facebook: Pax Travel Design. Her favorite moments, both on the road and at home, tend to involve food, family, and lots of laughter.

Into the Everglades: A Post-Hurricane Airboat Adventure at Sawgrass Recreation Park

Passports for Teens: Tips for getting and renewing...

Ten Things You Should Always Pack for Travel...

Ten Things You Should Pack for a Road...

4th Graders FREE in National Parks with “Every...

Get “Instavacation Inspiration” for your future travels!

Ten Tips for a Smoother London Vacation with...

Ten Things You Should Do Before Booking Family...

Give an Old Suitcase to Charity & Get...